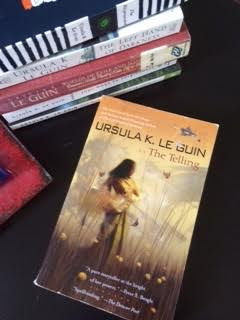 Aka is a planet whose totalitarian government destroyed its culture and history in order to build a technologically-based society, with an eye on a future that would take them to the stars. Its citizens are closely monitored, books and ancient traditions are outlawed, as is their religion, the Telling.

The Telling is Book #8 in Ursula Le Guin's Hainish Cycle series. In this story, Sutty, an alien observer from Earth, struggles to find and later understand Aka's long-lost history and culture - specifically, since Aka's culture stands as a complete opposite to her own experiences in Earth.

Sutty's dangerous journey takes her into the heart of the planet, where she finds that Aka's culture, customs, and traditions, are very much alive. More importantly, despite all attempts by the government to erase it from the collective memory, the Telling has not been lost to time. As Sutty studies and explores this ancient religion, her journey becomes personal, and slowly she loses the objectivity and distance of the observer.

Based on Taoism and revolutionary Chinese culture, Le Guin approaches this work of science fiction for the sociocultural perspective, as it examines human behavior in a closed, restricted, society. Sutty's own struggle to understand herself comes to represent the individual's attempt at self-examination while being part of that same repressed society. Additionally, Le Guin is unquestionably a mistress of language, and in The Telling, she plays with language and its nuances: in this case, language's true significance when placed in context with culture.

The Telling is not a quick or fast paced read, but it is definitely profound, and more than worth the time. I loved it. Highly recommended.