… On Vander: The Magnificent Tool 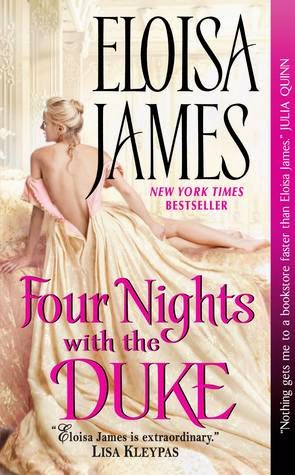 Four Nights with the Duke or is it Vander & His Magnificent Tool? (Vander: The Magnificent Tool?) I haven't made up my mind about him yet, but there is no question that this Duke is a tool.

This romance begins as fifteen year-old Mia eavesdrops on fifteen year old Vander and his best friend Thorn (from Three Weeks with Lady X) as they read a romantic poem she secretly wrote about her love for Vander. The two boys are joined by a school mate nicknamed Rotter and the three proceed to destroy the poem by finding sexual innuendos where she meant none, i.e., "moonbeam" = Vander's tool. The boys also act like fifteen year-old idiots and make personal comments about Mia's body parts -- focusing on the size of her breasts. Mia is brave enough to confront them, but as a result becomes totally self-conscious about her looks.

Years later, Mia, now a successful author writing under a pen name, finds herself in a terrible situation and blackmails Vander into marrying her. When confronted by blackmail, Vander reverts to being a tool by opening his breeches and exposing his magnificence to Mia in the hopes of scaring her off.

This man is a Duke? Supposedly. Vander is convinced that because Mia wrote that poem when they were 15, she is still a spinster and blackmailing him because she must be in love and hot to bed him. The arrogant idiot has no choice but to marry Mia, but doesn't even bother to read a letter she writes for him enumerating the conditions of marriage because: "a wife must do as the husband dictates." And, he comes up with the foolish idea that he will allot four times a year to bed her, but first Mia will have to beg him. Shenanigans, tool usage, and the eating of crow by both parties ensue.

The style used by Eloisa James to develop this story, as well as the type of male protagonist, reminded a lot of Three Weeks with Lady X. Yes, Vander is a Duke but he's very rough around the edges and no gentleman. That is proven by his on and off mean attitude, over-the-top lusty behavior (he's a walking erection for most the story) and appalling lack of manners in his dealings with Mia. Mia is a Lady. Never mind that her father was Vander's mother's lover. It is understandable that Vander gets upset over getting blackmailed, and that he resented Mia's father all those years on his father's behalf. But, really? How old is this man?

Mia. I did not understand how a woman who spent years becoming independent by writing her own books, and is spunky enough to take care of her disabled nephew against her uncle's wishes, spends so much time worrying about having big breasts or wishing she were tall and "willowy." Someone please tell if I am wrong, but if I remember correctly during those times shorter women with curves were considered beauties, not "tall, willowy women."  Maybe when Mia was a 15 year old she did not realize this, but as an adult she did not know this?

So what did I like about this book? I loved a couple of the secondary characters and the interactions between them and both Mia and Vander. I particularly loved Vander's drunken Uncle Chancy who stole every scene where he appeared.

This romance has some good sections with humor, but frankly, toward the end I was just tired. I usually love James' writing style, her over-the-top characters, romps and romances. Unfortunately for me, I never stopped seeing Vander as an egotistical fool. So, Four Nights with a Duke was definitely not a personal favorite. Grade C or 3 stars at Goodreads.
------------------

NOTE: I wrote this review a while back (last year after reading the book) and never posted it, I decided it was time. Oh, and I made up my mind about the alternate tile…
Posted by Hilcia at 7:11 PM