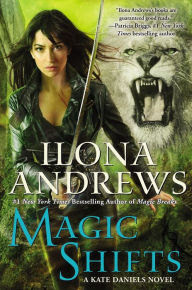 In Magic Shifts, the saga continues with Kate, Curran and Julie at their new home away from the Keep and the Pack. The peace lasts until George, Mahon's daughter, comes to them with the news that her new boyfriend and fellow member of Pack Heavy, Eduardo Ortega, is missing. Mahon disapproves of the relationship and refuses to actively look for Eduardo, and Jim as the new Beast Lord cannot nay say Mahon as the Alpha of Clan Heavy. Curran and Kate begin an investigation into Eduardo's disappearance that opens a whole can of worms, pitting them against new monsters that reveal the truth behind how ghouls came to be.

Magic Shifts is a transitional, action packed installment in the Kate Daniels series. The action is fierce and steady with secondary characters from the Pack, as well as Julie, making significant contributions. Yet, the Andrews writing team take a slow road to shifting the series into a new direction. Curran is adjusting to being away from responsibility as the Beast Lord and finds a new focus, while Kate glimpses what it means to be responsible for Atlanta, and what future dealings with her father Roland hold. In the meantime, Julie enjoys some serious "quality" time with Curran and Kate as she joins them in their dangerous adventure.

Although Magic Shifts is a highly enjoyable urban fantasy read -- let's get serious, this is a Kate Daniels book after all -- this is not my favorite book of the series. I believe the reason behind that is because I expected a clearer, stronger, better defined shift in the overall story arc now that Kate and Curran are away from the Pack.  Regardless, this was an enjoyable read and one I wouldn't have missed. Now, I'm looking forward to the next installment. Rated B or 4.0