The Summer Dragon by Todd Lockwood 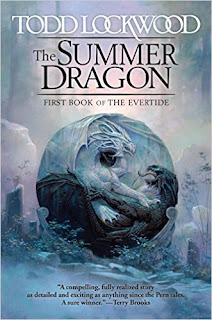 Last week I finally finished reading The Summer Dragon by Todd Lockwood. To clarify, this series is young adult fantasy.

Maia, the protagonist, and her brother Darian are both coming of age and hoping to get their own dragons. Every year their family's aerie provides the Empire's Dragonry or armies with the best they have to offer. Unfortunately for Maia and Darian, due to a conflict that has devastated the majority of the aeries, the Dragonry requisitions their entire clutch and a pair won't be available to them. Everything changes when the mythical Summer Dragon, a harbinger of change, appears to Maia and Darian. They believe it is a sign that good things will come and that maybe each will get a dragon after all. Unfortunately, religious and political entities interfere and their interpretation of the sighting becomes a catalyst in Maia's and her family's lives and livelihood.

Maia becomes the center of the controversy, attracting the attention of the highest religious, political, and military powers. They decide to take her to the imperial capital for interrogation in order to verify the sighting of the Summer Dragon. Instead, Maia makes a decision and sets off into the wild to find her own wilding dragon. The adventure really begins.

There are different angles to this story, beginning with multiple questions about historical facts and the religious beliefs of the people in Maia's community vs. Empire's religious beliefs and historical records. These differences are addressed throughout the book and become the main conflict in this novel. Another angle is the deep bond between a girl and her dragon. This part of the story has a deeply emotional, touching beginning that makes quite an impact, which leads the reader to become invested on the close relationship that develops between them later on. And of course there is a matter of war and the effects it has on Maia, her village, the neighboring communities, and Empire as a whole.

This is a wonderful coming of age story with a strong young female as the central character, and the added bonus of having dragons as more than sidekicks. These dragons bond with their riders, love their mates, and well… you would have to read the story to find out what else they can do. They have distinctive personalities and become characters on their own right. There are battles with fantastic action scenes where both dragons and humans are key to the outcome. Additionally, although Maia is our central figure, her own dragon becomes indispensable in her life. She is also surrounded by family, friends, a community, and a cast of secondary characters who contribute to her adventures, provide balance to this story, and a solid base for the rest of the trilogy.

Lockwood's descriptive style is particularly notable, as he makes it easy to visualize the setting, the dragons in all their glory, as well as those fantastic aerial battle scenes which took my breath away! Truly, some of them were absolutely stunning. Main and key secondary characters show character growth, with some two dimensional characterization found within the vast tertiary cast. Pacing was slow in some sections, although when the action scenes came along the pace became quick and exciting. And, of course there are a few conflicts left unresolved as the story is set up to continue.

Todd Lockwood is an illustrator and artist, and The Summer Dragon is his debut novel. I am happy to report that I found this first book of The Evertide trilogy to be a highly enjoyable book all around. Besides the characters, world-building and plot, I also thoroughly loved the magnificent illustrations that Mr. Lockwood included throughout the book.