Review: A Matter of Class by Mary Balogh 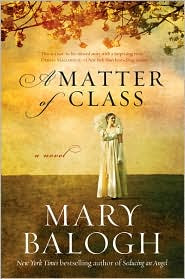 Reginald Mason is wealthy, refined and, by all accounts, a gentleman. However, he is not a gentleman by title, a factor that pains him and his father within the Regency society that upholds station over all else. That is, until an opportunity for social advancement arises, namely, Lady Annabelle Ashton. Daughter of the Earl of Havercroft, a neighbor and enemy of the Mason family, Annabelle finds herself disgraced by a scandal, one that has left her branded as damaged goods. Besmirched by shame, the earl is only too happy to marry Annabelle off to anyone willing to have her.
Though Reginald Mason, Senior, wishes to use Annabelle to propel his family up the social ladder, his son does not wish to marry her, preferring instead to live the wild, single life he is accustomed to. With this, Reginald Senior serves his son an ultimatum: marry Annabelle, or make do without family funds. Having no choice, Reginald consents, and enters into a hostile engagement in which the prospective bride and groom are openly antagonistic, each one resenting the other for their current state of affairs while their respective fathers revel in their suffering.

A Matter of Class by Mary Balogh immediately caught my eye when I saw the above blurb. There's something about the story and the characters' actions that seemed different from other Balogh stories I've read.
We begin with Reginald Mason, a young man who is the epitome of the dissipated ton buck. He is more concerned with fashion and his matched pair of grays than he is with paying gambling debts or responsibilities. He is not Balogh's usual hero -- the man of honor whose family is most important and whose judgment is impeccable, if questionable when it comes to love. Instead, Reggie is meeting with his father who is giving him an ultimatum -- he must marry whoever his father chooses or his funds will be cut off. Things have gone too far.
We then meet Lady Annabelle Ashton, the beautiful daughter of an Earl who opted to run away with her lover -- a coachman -- instead of marrying the man her father chose for her. She is another departure for Balogh whose heroines are usually women of character willing to sacrifice themselves and their love for their families. But not Annabelle, she would rather be ruined than marry the wrong man. However, Annabelle is alone and has gone too far to have any real choices left opened to her. Her father is shutting her away in a Scottish country state, alone. After none other than Reginald Mason, Senior offers his son Reggie up for marriage, Annabelle must agree to marry this "lesser" man or end up as a shut-in in Scotland.
The enmity between the two fathers in the story is key. The Earl is arrogant and entrenched in the class system that makes him superior to Mr. Reginald Mason, Senior. Mr. Mason is a coal merchant and although his wealth is vast, he is considered presumptuous when he purchases the estate next door to the Earl. For thirty years these two men and their families ignore each other, and the enmity and resentment grows with the years on both sides. After all, the Masons are not considered good enough to be acknowledged by the Earl or his family -- not even in church. Mr. Mason, Senior has been waiting for just such an occasion to make the Earl pay for years of public humiliation.
This novella was quite short and a quick read -- 196 pages, 1.5 spaces between lines, slightly bigger font than usual -- yet, this little book is a complete romance. Reggie and Annabelle's characters and their story are both developed through a series of small flashback chapters weaved throughout the book. We go from the present to the past and get progressively close to the present as we reach the end, closing the circle and getting a complete picture. I don't usually like flashbacks in a book, but it worked beautifully in this little story.
This begins as an antagonistic relationship since the main characters are being forced into a marriage. Yet because of the way it is written, there's no question of believing Reggie and Annabelle's "happily ever after" when it comes. The class structure in the Regency era is central to this story and central to all the relationships. Ms. Balogh uses this exploration in class differences as the main conflict in the romance and it works quite well. There's a twist at the end that I won't give away, but it made me love this couple.
A Matter of Class is a little gem of a book that I've already re-read. I thoroughly enjoyed Reggie and Annabelle's short, but complete little romance. This novella by Balogh is a keeper for me. Grade A
You can visit Mary Balogh here.
Posted by Hilcia at 7:18 AM