Review: At Home in Stone Creek by Linda Lael Miller 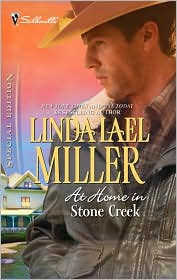 Everyone in Ashley O'Ballivan's life is marrying and starting families—except her. But what date can compare to Jack McCall, the man who broke her heart years ago?And now he's mysteriously back. But he isn't who she thinks he is.

After a dangerous mission working for the DEA, security expert Jack McCall rents a room in Ashley's bed-and-breakfast. For her sake, he must keep his distance. But his feelings for her are so powerful that only his heart remains off-limits. To protect her—from his enemies and himself—he has to leave…vowing to fight his way home to her and Stone Creek forever.

It has been a long time since I read a Linda Lael Miller book. At Home in Stone Creek is a Silhouette Special Edition and it is the third book in the O'Ballivan's family series. There are four siblings, Olivia, Brad, Ashley and Melissa. I'm not sure if because this book is part of a series I missed something along the way, but the story involving Jack and Ashley seemed pretty self-contained.

Jack and Ashley have known and been involved with each other since their college days. Jack has been in and out of Ashley's life throughout the years, basically without any real explanation. It's obvious when the story begins that Ashley is in love with Jack, but he disappeared again 8 months before in the middle of the night without saying goodbye. She hasn't heard a word from him during all that time and she's pretty depressed. Ashley is also depressed due to a recent loss in the family and she's emotionally at odds with her siblings over that loss.

Jack suddenly returns to Stone Creek from what we learn was a "mission." He is suffering from high fevers after being shot with an unknown toxin and is almost incoherent. All Jack wants is to be close to Ashley so he can either die or recover at her B&B. Ashley takes him in and soon, after some incredibly fast recovery, they are back at having a relationship again. A relationship her siblings are not happy with, especially since Jack has a dangerous drug lord after him. The storyline gets further complicated by Jack's past, Ashley's family interference, Jack's health and even Jack's family.

In At Home in Stone Creek the loving between Ashley and Jack is sweet and I believed they did love each other. There is also a sense of family that permeates the story. Both Ashley and Jack's families appear in the book and as secondary characters they provide depth to the story. However, I had some major problems with this book.

Ashley is a twin and she is obviously the one without the grit in the family. I kept waiting for her to show some gumption along the way, but I'm afraid it never happened. Ashley was one of those heroines who lets herself be steamrolled by the hero, her family and just about anyone who comes along. Her siblings hurt her feelings, but she doesn't say anything. Her brother Brad makes decisions regarding her relationship with Jack and although upset, Ashley goes along. Jack makes decisions for her, lies to her and she doesn't get upset -- she understands. I was more than a little frustrated with Ashley's character.

My problem with the heroine alone is enough for this book to have been a disappointment. However, Jack was not my favorite hero either. He actually never really explained himself to Ashley truthfully. He gave her only what he thought he could give her, made decisions for her throughout the story and that's not something that changed. There's also a side story about Jack and his family that made him into quite the unsympathetic hero for me. I won't say what he did, but I don't know if I would have forgiven him so easily.

At Home in Stone Creek was a book with some good points, but not a great read for me personally. Grade C-