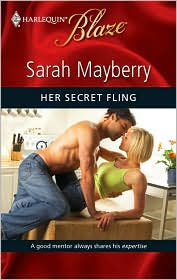 Jake Stevens—star reporter and celebrated literary genius—is a snake. How else to explain the way he turns Poppy Birmingham's hero worship into loathing with a single conversation? So what if she's got a lot to learn about journalism? Aren't they coworkers now? On the same team? Jake can take his attitude and…
Then during a job-related road trip, their relationship goes from antagonistic to hedonistic in no time flat. And suddenly Poppy can't think of anything more delicious than having a secret fling with Jake. But with all this intensity, can she really keep it no-strings-attached?

This Blaze category romance by Sarah Mayberry set in Australia features Jake, a star sports journalist hero and Poppy, a swimmer and Olympic gold medalist who has decided sports journalism is what she wants to do with the rest of her life.
Poppy is naturally insecure about her abilities as a journalist. All she really knows is swimming and her confidence is lacking outside of the swimming pool, but she's determined to make changes and to succeed. On her first day on the job she meets her journalistic hero, Jake Stevens. She has read his book, all his articles, and has a secret crush on the handsome and brilliant man. But Jake is not happy to see Poppy in the newsroom. Oh, she's talented enough as a swimmer and she'll do as a woman, but as far as Jake is concerned, she has no business taking the place of a "real" journalist. Her gold medal doesn't mean she earned the right to be there or the respect due to someone who has worked for it. Jake is blunt and has no problem when it comes to expressing his feelings to Poppy. He even refuses to mentor her.
The antagonistic dialogue and relationship that develops between Poppy and Jake keep the story interesting as the tension grows between them. Jake certainly comes off as a snake at the beginning of the book and we feel for Poppy. During an assignment away from the newsroom, they are thrown together and an unexpected road trip ensues. This is where Mayberry steps up the character development. Poppy and Jake try to outdo each other with snark and as the sexual tension builds and snaps the story gets better... and hotter. This is the point where they begin to really "see" each other in a clearer way.
Neither Poppy nor Jake want to have an "office" affair. They're not interested in a long-term relationship either. They both have baggage they carry from their past that affect their decisions. Yet, these two people can't seem to stay away from each other and before they know it, they are in the middle of a hot, heavy and complicated affair.
In Her Secret Fling, Mayberry again develops a quick paced, full, rich romance in a short format. She gives this couple the time to know each other and a plausible conflict that she resolves beautifully. I love the way she develops Jake from being a total jerk into a lovable, sympathetic character and Poppy into a heroine that is neither too stubborn nor a doormat. There are secondary characters, but the focus is kept firmly on the romance and the main characters. The secondary storylines and some characters are used by Mayberry to give depth to the central characters.
I am loving the way Mayberry writes a contemporary where the hero and heroine don't just fall for each other in one day -- and she does it all in the short category romance format. Another hot, lovely romance by Sarah Mayberry. Grade A
You can visit Sarah Mayberry here.
Posted by Hilcia at 8:37 AM