I planned to read and review a historical romance for my first Year of the Historical Challenge review. However, after reading Last Days of Summer by Steve Kluger, I decided that since a book set in World War II qualifies by KMont's rules, this was going to be my review for this Challenge. The genre is a bit of a mixed bag, I've seen it tagged as YA, Literary Fiction, Sports Fiction, World War II, Men's Fiction, and well... you decide. I prefer to think of it as Fiction with Historical elements and think it deserves to be widely read. So here it is, my first YotH review. 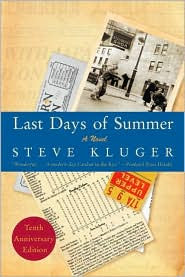 Last Days of Summer is the story of Joey Margolis, neighborhood punching bag, growing up goofy and mostly fatherless in Brooklyn in the early 1940s. A boy looking for a hero, Joey decides to latch on to Charlie Banks, the all-star third baseman for the New York Giants. But Joey's chosen champion doesn't exactly welcome the extreme attention of a persistent young fan with an overactive imagination. Then again, this strange, needy kid might be exactly what Banks needs.

I loved the first book I read by Steve Kluger, Almost Like Being in Love, and yet Last Days of Summer still managed to surprise me. I don't think I expected to be caught up in the story or the characters in the same way. I was wrong.

Kluger takes us to Brooklyn, New York in 1940 to tell us Joey Margolis' story. He is a 12 year old Jewish boy who having recently moved from Manhattan with his mother and aunt becomes the neighborhood bullies' punching bag. Lacking a father figure in his life, Joey is desperately looking for someone to take that place. He chooses a reluctant Charlie Banks, the new 3rd Baseman for the New York Giants baseball team.

Joey is a smart-mouthed, needy, brilliant little boy who goes to great lengths to get what he wants. His imagination, determination and persistence become legendary throughout the story. Charlie is a baseball player through and through. An uneducated young man who doesn't necessarily make the best first impression, Charlie doesn't seem to be the best choice for hero worship. However, once Joey chooses Charlie he doesn't stand a chance, no matter his reluctance to accept that role. Kluger again uses his favored epistolary style to reveal Joey and Charlie's improbable story of friendship. Through letters, telegrams, report cards, tickets and other means of communication, this beautiful story of friendship and love unfolds as the characters are revealed.

Last Days of Summer accurately details some incredible New York baseball history (Brooklyn Dodgers, New York Yankees, New York Giants) and other teams as well, but baseball doesn't overwhelm the book. Also, through Charlie and Joey we glimpse the history of the times between 1940 and 1942 and slowly experience how things change and develop throughout the country. Kluger covers the slow escalation of World War II in Europe, Roosevelt's New Deal, Pearl Harbor, the Japanese-American's Relocation Centers in California, and finally our troops in the South Pacific. Although again, as with baseball, history does not overshadow the main story.

Atmosphere is important when setting a book during these times. Kluger achieves this by the usage of language and attitude, as well as by incorporating wonderful details such as: music, Broadway shows, famous personages, and using the names of businesses that were around in 1940's New York.

I laughed quite a bit while reading Joey and Charlie's sharp and witty exchanges and their improbable adventures, although I admit that the content itself pulled some emotional strings at the most unexpected of times -- Joey's Bar Mitzvah was one of the funniest and most emotional events and one of my favorite. There were wonderful secondary characters in this book that made this story work, even though Joey and Charlie were always the main focus. I personally fell in love with Joey's Aunt Carrie and the Rabbi (Rabby).

The end of this book was very emotional for me and quite beautiful in its own way. If you want to know why I was surprised, well... it's because this book is not really about baseball and being a baseball fan that's what I expected. Instead, Last Days of Summer is a beautiful story about a boy who needs, and a man who by answering that need fulfills his own.

Last Days of Summer is a book I couldn't put down once I read the first few pages. That makes two keepers by Mr. Kluger for me. Grade A

Visit Steve Kluger here.
Posted by Hilcia at 6:51 AM