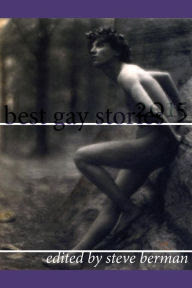 It has been said that life is "nothing more than an accumulation of moments or events," some pivotal in a lifetime while others just occur with no real beginning or end. I am always searching for short pieces capturing those unique or pivotal moments in a character's (or a real person's) life, and for authors with the talent to write in the spare, well-constructed, elegant prose necessary to create gems out of those pivotal or flash-in-the-pan moments. Personally, I prefer stories that wring a response from me: thought-provoking, positive, negative, emotional. I found much of or all of what I search for between the pages of this anthology. Here are a few examples:

"Outing" by Allan Radcliffe is hard to forget as it tenderly focuses on a special moment in the life of an established, older gay couple whose first kiss in public is inspired by two young men kissing at a train station. Touching and beautiful. In "Lovely Company" by Ron Schafrick a too cautious man makes the wrong decisions for his father and himself. This sad, realistic piece made me think about the importance of taking risks, living, and enjoying the moment. Life.

"What Did I Know?" by Joseph R.G. DeMarco is a profoundly thoughtful and intimate piece. A childhood trauma causes Joseph to suffer from fear of death, abandonment, and being forgotten. He believes that romantic love is the answer to his personal terrors. However, it is after losing his long-time partner, while going through the grieving process, that Joseph comes to understand the true meaning of love and finally sheds his fears. The intimacy of this piece engenders a connection with the reader. Personally, I re-read the last page countless times.

"Stories I Tell My Friends" by Richard Bowes is a compulsive read, not only because of the content, but because of the style in which it is written. Set in Boston, this is a string of stories, within a story, narrated by the author. They are recollections of events that took place during the narrator's childhood and young adulthood while his family moved from place to place. The narrator's father, cops, firemen and actors feature prominently. Events are intertwined as one story runs into the next until Bowes makes a final point. This is an excellent example of unique short story construction I mention above.

"The Case for PrEP How I Learned to Stop Worrying and Love HIV-Positive Guys" by Evan J. Peterson is an article in which the author makes his case for the drug Truvada. The essay lists points made against the drug, however in general it has a positive slant for its usage and interviews, numbers, percentages etc are utilized throughout the article for this purpose. Peterson documents his own choice to use Truvada and the stigma that follows those who make the decision to do so. He gives examples such as public judgments made against it (Truvada has been called the "whore pill"), as well as the fear-driven negative responses to a drug that allows gay men to have unprotected sex without fearing HIV infection. Informative and thought-provoking.

"Needle" by Peter Dubé is a story about a sex-driven, highly volatile relationship based on addiction and mutual violence. This intensely disturbing piece is deeply memorable, more so because Dubé keeps the reader on edge to the very end by utilizing two different settings, a skewed first point of view narrative and a silence presence that makes a strong impact. Excellent read. "Skin" by Joe Okonkwo actually wrung a wow from me at the end of this piece. Oh the hypocrisy!! Okonkwo focuses on ageism and the gay community's iconisation of the perfect body. He touches all the important points, i.e., the invisibility factor and the effect it has on men after they reach a certain age, as well as the love of the "body beautiful" and how it affects gay men who do not fall under that category. Skin is a great read throughout, but the ending makes it unforgettable.

"My Adventure with Tom Sawyer" by Jameson Currier is one of three re-reads for me, the other two are The Balaclava by Nathan Sims and Shep: A Dog by Alex Jeffers, two stories I thoroughly enjoyed. My Adventure with Tom Sawyer, however, has to be the most delightful story in this anthology. Currier is an author whose deft hand at writing a self-deprecating, humorous piece is so well represented with this piece that for the second time around I sat back, relaxed, and settled in for the long-haul forgetting that this is a short story, yet it ends exactly where it should. Excellent execution. Memorable quote: "I was aware that I was having one of those awful motion picture moments when the old- maid spinster realizes her tour guide is someone generations younger than she is. Or worse, finding myself in a country-music version of Death in Venice."

"Smuggler" by Philip Kennicott. "I remember my first kiss with absolute clarity. I was reading on a black chaise lounge, upholstered with shiny velour, and it was right after dinner, the hour of freedom before I was obliged to begin my homework. I was sixteen. It must have been early autumn or late spring, because I know I was in school at the time, and the sun was still out. I was shocked and thrilled by it, and reading that passage from a novel by Hermann Hesse, made the book feel intensely real, fusing Hesse's imaginary world with the physical object I was holding in my hands." Kennicott is referring to"Beneath the Wheel" as he begins this fantastic essay focusing on 19th Century and early 20th Century literature featuring homoerotic scenes or homosexual characters, and the positive / negative effects reading these books had on the author or may have had on other gay readers. He ends with what, if any, the future holds for these classics, particularly after all the recent changes that have taken place in the gay community. I am oversimplifying here friends, but believe me, this is a fascinating, well-thought out, clearly defined, elegant piece begging to be read.

The above samples highlight some of this anthology's diverse content, however, the gay theme is prevalent throughout and there's something for everyone. If you enjoy short fiction and non-fiction the way I do, Best Gay Stories 2015 is an anthology I recommend in its entirety.

Posted by Hilcia at 5:08 PM No comments: