'In Death' Challenge Review: Naked in Death by J.D. Robb

I'm beginning Christine's In Death Challenge by reading Naked in Death, Book #1. This is my first ever, J.D. Robb read, so I'm starting with a blank slate. I've heard and read many comments about Eve and Roarke and how "hot" Roarke is, but frankly I haven't really paid much attention to the details in this series since I wasn't following it, so before reading this book I was really an In Death virgin. No more! :) 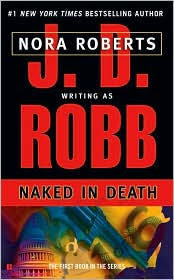 Eve Dallas is a New York police lieutenant hunting for a ruthless killer. In over ten years on the force, she's seen it all - and knows that her survival depends on her instincts. And she's going against every warning telling her not to get involved with Roarke, an Irish billionaire - and suspect in Eve's murder investigation. But passion and seduction have rules of their own, and it's up to Eve to take a chance in the arms of a man she knows nothing about - except the addictive hunger of needing his touch.

I'll begin by addressing what I enjoyed the most and what worked for me after reading Naked in Death -- the characters and the world.

What type of character is Eve? In Naked in Death Eve is introduced as a cop above all -- she believes in justice and the law. She herself says that if she is not a cop, she is nothing. Being Lieutenant Dallas above all things doesn't allow for too many friendships and Eve has few of those in her life. However, as expected, she is portrayed as the best at her job, a tough cop with experience. What makes Eve interesting is that she has a heart to go along with that outward and real toughness. Her vulnerabilities are not apparent, but they are there to see for those she might allow knowing her. Eve's nightmarish childhood explains some of what drives her, but it seems to me there's much more to her.

I'll just have to keep reading as J.D. Robb gave enough information in this book about Eve's personality, her past and her hang-ups to hook me, but left enough unsaid that she still remains a mystery. Eve Dallas' character certainly caught my attention.

What type of character is Roarke? Roarke is a gorgeous, Irish alpha male, sexy as heck and a multi-billionaire to boot. It's obvious that he is used to getting what he wants and doing what he wants, when he wants it. He is a brilliant, successful businessman with a murky past, who has obviously broken the law more than once and sees the world in shades of gray. Roarke doesn't have too many real friends and doesn't give of himself easily -- in that, he seems to be very much like Eve. However, I found him to be more willing to show his vulnerabilities to Eve and that was a pleasant surprise coming from this type of male.

Robb does the same thing with Roarke's character that she did with Eve's. We learn just enough about his childhood, his past and his present financial circumstances to satisfactorily develop this story, but the details are left unsaid. We'll have to get to know Roarke and what really drives him in future installments.

What about the world? I found the world Eve and Roarke inhabit an interesting one. First, it's New York City, a place I'm very familiar with, so it was fun to imagine all those floating vendors selling their wares on the crowded streets. That particular description reminded me of a scene in the movie The Fifth Element, where Bruce Willis is buying Chinese food from his high-rise building window from a vendor who is floating by. Neat! Second, I liked that Robb used technology that is advanced enough to give the book a futuristic atmosphere, but everything still felt familiar. The futuristic details did not overwhelm the plot or the character development.

Was there a plot? Naked in Death is a who-done-it that begins with a murdered licensed companion or licensed prostitute, and before we know it, it's full of political intrigue, corruption, a family's dirty little secrets and a cold, calculating murderer who is keeping a close eye on Eve. Eve has her hands full juggling the first murder, as the victim happens to be the granddaughter of a Senator. Between having to deal with the mayor, the Senator, the media, and investigating other murders as they begin to pile up, Eve also has to deal with the suspects as her investigation begins to take shape. Her main suspect: Roarke.

The more Eve gets to know Roarke, the less convinced she is that he is the murderer. However, she doesn't immediately trust her insticts when it comes to him. Eve is very attracted to Roarke and it seems to be mutual. Before Eve even realizes it, she is involved with Roarke on a very personal level as the fascination he initially feels for Eve turns into much more. But is he a murderer? And if not Roarke, then who else fits the profile?

Well, I can definitely see why everyone sighs over Roarke and loves Eve. The beginning of their romance is certainly intense enough that it easily became my favorite part of this book. Roarke is an impressive character -- both sexy and charismatic -- and Eve's combination of toughness and vulnerability makes for a winning combination. Their scenes together were both passionate and touching. One of my favorite little details was Roarke keeping Eve's suit button in his trouser pocket -- that little detail made ME sigh.

Less impressive for me was the murder mystery itself. It was done well enough, but I happen to be a bit picky when it comes to unanswered questions or sloppy police procedures that give away who did it in this type of book. I don't like it when it becomes obvious to me who did it before the end of a mystery, if that's not the intention. That part of the story was not entirely satisfying.

In the end, I loved the characterization and the futuristic atmosphere in this book, and I very much enjoyed the romance and sexual tension. I also enjoyed how J.D. Robb interconnected the romance and the suspense in this book. And although I found the suspense to be predictable, I'm looking forward to reading all about the futuristic police procedures used in the In Death series, as well as the ongoing romance. Grade B.
Posted by Hilcia at 6:27 AM