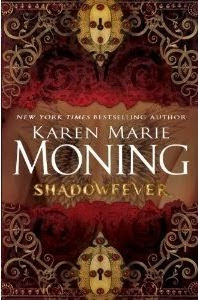 I'll begin by saying that there's no way to write this review without giving away some spoilers. This is the last book in a series of five, plus in order to really get into the story and express my thoughts, I must refer to characters and events.

Book Summary:
Shadowfever begins where Dreamfever ends, with Mac killing the Beast that protected her while she was lost in one of the Silver's dimensions. As the Beast turns into a human, she finds out this beast is none other than Jericho Barrons. Mac is grief-stricken and through that grief, comes to terms with her feelings for Barrons and comes to the decision that she wants him back. The outcome of her deep, dark grief is again one more transformation. When she looks into herself, she accesses a dark place where she can conjure runes to protect herself and/or bind others, mainly the Fae.

Mac proceeds to align herself with Darroc, the Lord Master, in order to get whatever information he has gained about the Sinsar Dubh. He appears with the Unseelie Princes, and after coming to an understanding, agrees to take Mac out the Silvers. In order to get back to Dublin, Darroc must use a Silver and he takes Mac through the Unseelie King's concubine's White Mansion where some of Mac's buried memories come to the forefront.

But all is not as it seems, and Barrons is not dead. A chain of events unfolds where, through reading different translated prophecies and experiences dreams and recollections, Mac ends up questioning her origins. In the meantime, after Mac rescues the Seelie Queen from certain death, the hunt for the Sinsar Dubh is redoubled and all the interested parties assemble in Dublin. The McKeltars come from Scotland and join the fray, Rowena and the Sidhee-seers are at the center of it all, as are V'lane, the Seelie and Barrons men. Everyone wants the Sinsar Dubh, and most of them want Mac dead.

Review:
I'm a fan of Karen Marie Moning's work and when I began reading this series, I was excited and thought that the story was quite interesting. I still think the story behind the series, the battle between the Seelie and Unseelie, their lore and how humans and the Sidhe-seers come into it, is fascinating. As a matter of fact, I spent countless hours doing background research and I still have copious notes, including the sequence of events, characters, etc. Having said all that, the Fever series as a whole has been inconsistent for me -- I enjoyed the second book and the rest were inconsistent or disappointing.  When it comes to Shadowfever well... in many ways it provided what I know many were looking for: a happily ever after and the answer to some questions. However, for me personally, the book was a disappointment. Here is why.

By the time Mac finished processing the fact that she killed the Beast, or Barrons, I was already tired. Where did that come from? I understand that she felt guilt, that there was lust between them and dependency on her part. But where did love come into it? The long, interminable diatribe we were treated to at the beginning of the book served no other purpose than to set up the following scene. Mac's transformation, again! Yes... because of her actions, guilt, and need to erase those actions, she transforms and (gasp) gains ADDITIONAL powers. This device was used to death in this series, and became a predictable device.

Throughout the series, Moning uses long and involved internal dialogues to develop Mac and to narrate her story. However, in Shadowfever this style is used to an extreme. There are pages and pages where Mac contradicts herself over and over again throughout the whole book. This often served to confuse and distract the reader. After a while, all it achieved was frustrate me and yes... I wanted to skim Mac's prolonged and contradictory self-analyses. I couldn't stand her thoughts any longer and just wanted to get on with the story. Period.

As a female protagonist/heroine, Mac left a lot to be desired. I was not impressed. She was manipulated by all the males around her, and the ones with the real "Power" were ALL male: Barrons, V'lane, Darroc, the Unseelie King, the Sinsar Dubh (yes), and Ryodan. She depended on them, one way or another, to do what she had to do. They played her like a violin. I don't care how many transformations she had to make her into a "kick ass-type heroine," Mac wasn't strong for herself, instead she was strong for others or because of others.

Then we come to Barrons and the "romance." Barrons treatment of Mac is explained away by making him part Beast, yet even when he is a man... his treatment is questionable. He is often violent, possessive and downright abusive at times (both verbally and physically). They fight and have sex and that's supposedly where they truly understand each other. How is that supposed to be romantic? It's not. Mac's see-sawing, back and forth feelings for Barrons continue in this book! No, it's not over after she realizes he's alive... it goes on and on. Yet, they do come to a sort of mutual emotional understanding and dependency by the end. I still think that in order to call it love, that relationship needs further development.

There are resolutions to some of the threads, and some of those resolutions are good -- some predictable and others not. There's a "happily ever after" for one couple in the book that was unexpected,  and there are plenty of betrayals by both friends and foes. We are told there are battles, although few of those are shown, and characters from the whole series make appearances.

As to the rest of the storyarc, there were threads left incomplete left and right, and some that didn't seem to serve a real purpose. For example: The McKeltars were a waste of pages read, what was the point? Christian McKeltar plays a key role in this book and series, yet his story is left incomplete. Barron's story is also left incomplete -- although some details are revealed about his past to pacify readers, there's no meat to his story, no in-depth details or revelations. Dani has her own point of view in Shadowfever, yet she disappears and is absent at the end, leaving the reader wondering what happened to her. And last, but certainly not least, the most important story line of them all! The Seelie and Unseelie, the wall and their battle? Incomplete.
So what does that tell this reader, apart from the fact that the book finishes with "The End .... for now?" Well, it says that either this series' "ending" is riddled with holes, or that there will be a continuation that will involve all the above mentioned story lines. And for me neither is acceptable, not when this book was supposed to be THE END to this series.