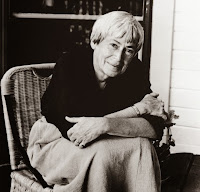 About the Author: Ursula K. Le Guin is the author of more than 100 short stories, 2 collections of essays, 4 volumes of poetry, and 18 novels. Her best known fantasy works, the Books of Earthsea, have sold millions of copies in the U.S., the U.K., and have been translated into sixteen languages. Her first major work of science fiction, The Left Hand of Darkness, is considered epoch-making in the field of its radical investigation of gender roles and its moral and literary complexity.

Three of Le Guin's books have been finalists for American Book Award and the Pulitzer Prize and among the many honors her writing has received are a National Book Award, five Hugo Awards, five Nebula Awards, the Kafka Award, a Pushcart Prize, and the Howard Vursell Award of the American Academy of Arts and Letters.

In the two science fiction books I read by Le Guin, (The Birthday of the World and The Left Hand of Darkness) she seemed to be significantly deliberate in her presentation of race, gender, culture, and social identity. Her characters, in their majority, are racially and culturally diverse, and the examination and exploration of gender roles and sexual identity take center stage. This exploration largely extends to include the psychological and sociological impact that effects individuals as they first interact with diverse indigenous populations, different environmental issues, cultures, and political structures. In some of her stories the cultural exchange shocks one side, however in others, it has the reverse effect and/or is experienced by both sides.

In the introduction to the above mentioned books, Le Guin refers to some of her stories as "thought experiments." I can see why, and believe that she seems to have found the perfect niche to conduct those experiments within the Science Fiction genre. From what I've read so far, I think of her work as social science fiction, although I understand that she's not fond of labels. However, if like me, you are just beginning to familiarize yourself with Le Guin, then I believe there is a need to point out that her science fiction is not composed of epic space battles or fast paced action. Instead, I found that her books are masterful pieces of science fiction written in gorgeous prose, with stories that will make you think, and then think again.

In the Hainish Cycle series, for example, Le Guin conducts her "thought experiments" by utilizing a whole galaxy of worlds inhabited by different civilizations descended from humans originally born in Terra. Throughout the centuries the inhabitants of these worlds have evolved, sometimes physically to adapt to their environment, but more significantly these civilizations have established different cultural and social structures. Using Le Guin's own words, she has constructed a "loose world" in which a galactic civilization composed of different planets are connected by a central organization called the Ekumen. Le Guin describes Ekumen as a "non-directive, information-gathering consortium of worlds, which occasionally disobeys its own directive to be non-directive."

The Hainish are first and foremost observers and collectors of information about other civilizations -- they learn, absorb, integrate, and as a result grow individually and collectively. Their way is not to interfere with the development of the diverse cultures encountered, instead the Ekumen organization first sends out teams of observers to inhabited worlds to learn language, general culture and assess whether the indigenous population is ready to join their galactic civilization in the trade of goods, advanced technology and education. This process may take centuries. Once readiness is established an envoy or "mobile" is deployed to make first contact and to record his experiences. If the first "mobile" fails, they may send another one later on.

The Hain and their Ekumen travel through space and communicate instantaneously through a device called the "ansible." However, although advanced technology is used, they do not possess that of faster-than-light travel. This combination of slow travel with fast communication gives the worlds within the galactic Ekumen organization the ability to trade, but it also keeps the worlds isolated and independent from each other. So there are no nitty gritty details of advanced technologies, instead Le Guin gives the reader enough information to sweep them along with her "mobiles" as they travel and experience different alien worlds, giving her the opportunity of putting into play the exploration of race, gender roles and sexual identity, culture, and social identity, as well as the psychological and sociological impact, I mention above.

I've had The Dispossessed (1974) in my Kindle for a while, but I decided to explore Le Guin's work through short stories (just a taste first, I thought). As a result, I began reading this series from back to front and then proceeded by picking up a book out of sequence.

I picked up The Birthday of the World: and Other Stories (2002) first, a collection of short stories of which six of the eight are connected to the Hainish Cycle series. I read the first two stories plus the last one, stopped reading the collection, picked up The Left Hand of Darkness (1969), went back to the collection and was hooked. Now, I have the entire series in my possession (some in print and others in ebook format) and hope to read as many books as I can this winter (in order!).

My December posts will all become part of my participation in the 2014 Sci-Fi Experience hosted by Stainless Steel Droppings.


*The Worlds of Exile and Illusion omnibus contains the first three novellas of the Hainish Cycle series: Rocannon's World, Planet of Exile, and City of Illusions.