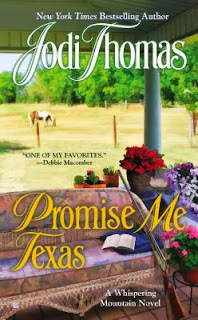 On a midnight train, four hours away from her wedding, Beth McMurray discovers the devastating truth about the powerful senator she's about to marry. Convinced nothing could make this stormy night worse, the train wrecks, and she tumbles straight into the arms of an outlaw.

Andrew McLaughlin doesn't believe in loving except between the pages of his writings. He loved deeply once and thinks he'll never survive another loss. To save a friend, he climbs aboard a train heading toward Dallas. In the moment before the train crashes, he saves a beautiful woman and is injured in the fall. He wakes up to find she’s claimed him as her fiancé—and now they’re both on the run, and destined to do everything it takes to make an unexpected promise of love come true.

I'm a fan of Jodi Thomas's western historical romances. I like her characters and the loving warmth in her stories, which makes a great change from the gritty and sweepingly passionate romances that I usually prefer. Promise Me Texas, the romance between Teagan McMurray's youngest daughter Beth and Andrew McLaughlin, qualifies as one of those romances.

This romance begins with a betrayal and a lie. First, when Beth impulsively rides to surprise her fiancé, a powerful Texan senator, on the train that will take them both to Dallas where she has agreed to secretly marry him, while eavesdropping, she finds out what he really thinks of her and why he chose to marry her -- the words "dumb and spoiled" are a few words he uses to describe his future wife to male companions. Disgusted with her poor judgment and fiancé, Beth leaves the rail car, only to be saved when the train crashes by a man who, as part of a gang, is attempting to rob the train.

Both Beth and her savior survive the crash, but he is injured and to save him from hanging she lies to the Sheriff and doctor by claiming the stranger as her fiancé. With that one little lie, Beth changes her life and that of Andrew McLaughlin. As the story progresses, Beth's and Andrew's lives get even more entangled when she claims him as her husband in order to stay with him at the hospital where he is treated for his wounds. One lie leads to another, until the McMurray family gets involved, Beth begins to think she's really married to Andrew, and he begins to wish they were.

I really enjoyed this western historical romance by Thomas with its outlaws, con men, and the general chaos that ensues as a result of Beth's initial lies. It's like a comedy of errors or a snowball that grows as it plunges down a mountain to disaster. I don't know who I liked more, Beth with her naiveté and bravado, or Andrew with his infinite patience and willingness to take on, not only Beth, but everyone else she picks up on the road -- the two young boys Levi and Leonard, and the young girl and the cowboy, Madie and Colby. They make a rag tag group at best, and Andrew as an outlaw/writer has the patience of Job in his dealings with Beth, the crew, and later on, her family.

The romance is sweeeet as it evolves! There are sweet good night kisses, passionate kisses, laughter, and more "dears" than I can count, so that the outcome is absolutely adorable - cute, sweet, and worth the read. I love that even with all the other characters that accompanied Andrew and Beth throughout their adventure, they spend most of the book (maybe all of it?) together. Those "dears" did make them sound like an old married couple after a while, and took a bit of that young, passionate loving feeling away from the romance, but that is a minor complaint. Overall, this is a heartwarming, loving romance that I enjoyed.