Review: The Birthday of the World: and Other Stories by Ursula K. Le Guin 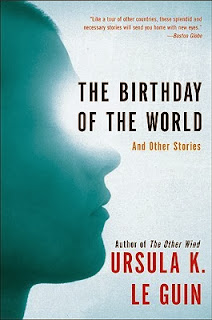 Published by Harper in 2002, The Birthday of the World: and Other Stories is a collection of eight stories by Ursula K. Le Guin. The collection begins with a marvelous introduction in which Le Guin provides readers familiar with her works a behind-the-scenes look at each story and new readers, like me, with enough understanding to enjoy them. Six of the eight stories are connected to her Hainish Cycle* series. These stories are all set in the different worlds Ekumen mobiles explore. In three, Le Guin focuses and expands on distinctive sets of social and/or cultural customs, while in the rest her mobiles confront conflicts arising from either observation or active participation in their attempt to understand different civilizations.

Of the stories focused on cultural and social customs, "Coming of Age in Karhide" is a favorite. Set in the frozen Gethenian world where its inhabitants are androgynous hermaphrodites, Le Guin weaves a coming of age piece filled with detailed intimacy and warmth. Le Guin refers to the other two stories, "Unchosen Love" and "Mountain Ways," as "a comedy of manners." They are both set in the world of "O" where the custom is for marriage to take place between four people -- two males and two females. The complexities used as a base to build this society's familial bonds were both intriguing and well thought out, however, neither story kept me as entranced as the outstanding tales where her mobiles discover conflict through observation or confront it through personal participation.

"The Matter of Seggri" is composed of observation reports written by various "mobiles" throughout years or centuries as they witness changes taking place in a society where women outnumber men. With Seggri's world, Le Guin experiments with the reversal of gender roles, as well as with the inevitable consequences arising from a society where "men have all the privilege and women all the power." Does Le Guin's thought experiment using gender imbalance and role reversal lead to a utopia for women? This is a fascinating study that ends the way it should.

"Solitude," also has a bit of that role reversal happening since villages are composed solely of women and children, while males are thrown out into the wilderness to fend for themselves as soon as they reach puberty. Women choose if or when to visit males for sexual pleasure or to have children, but all inhabitants of this planet, males and females, relish solitude. The mobile in this piece pays a high price when she brings her children to live within this society. Le Guin conducts an intricate, detailed exploration of culture, gender roles, and human nature in this favorite piece.

And finally, in "Old Music and the Slave Women," Le Guin takes on the subject of racism and bigotry and turns it on its head by taking the reader to the planet Werel where slavery has always been the way of life. She picks up the story in the middle of a revolution as the slaves are winning. The long-term chief intelligence officer from the Ekumical embassy is taken prisoner by the losing side to be used as a weapon against them. Narrated from the mobile's point of view, his ideological views soon clash with the cruel realities of what a physical revolution entails as he first meets one faction and then the other. Will things really change? Or in the end, is bigotry and racism so ingrained in this society that it won't matter who comes to power?

Of the two remaining stories, including "The Birthday of the World," "Paradise Lost" captured my attention and stayed with me, not only because it deviates completely from the rest, but because the content and writing are fabulous. This is a space voyage set in a generational ship, focusing on the middle generations whose lives begin and end during the journey. Their duties are that of maintenance and ensuring that the journey continues unimpeded to its final destination. Imagine that! To those middle generations the ship is "the world," where they have built their own complex realities, have no real knowledge of their home planet Earth or Dischew, and little interest in their Destination. These generations's only knowledge of Dischew is through virtual reality programs where they learn about dangers encountered by past generations in their home planet through an educational system established by Generation Zero.

"History is what we need never do again." Generation Zero attempts to build a future "world" where subsequent generations learn from their past history. There is no organized religion, disease, crime, and people's lives are highly organized and therefore effective -- all is beautiful, perfect and in its place. But, although certain anomalies are considered, they forget that humans learn through experience, that history is often manipulated and lost to future generations, and that what is important to one generation may become obsolete to others. They fail to take into consideration the human factor and, as expected, there is trouble in Paradise. However, in Paradise Lost that human factor also includes love of freedom and the beauty that life has to offer. This is a 115 page-long study of the complexities (the seemingly simple and deeply profound) found in human nature.

As an added bonus at the end of this book, you will find the fabulous essay "On Despising Genres" (a piece that deserves a post of its own), followed by "Answers to a Questionnaire." Both give the reader further insight into the author's personal thought process.