I have lots of series to catch up on. However since I already read the first book in the Cowboys of Cold Creek series by RaeAnne Thayne for this Challenge, I decided to end my curiosity about these brothers, and just read Dalton's Undoing, the third book in the original trilogy. I've had this book in my digital TBR for over a year, so it's about time! 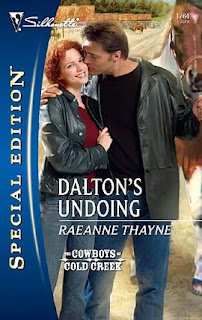 HE HAD A REPUTATION...

He was known as a major player who'd left a swath of broken hearts across the Teton Valley. Yet when single mother Jenny Boyer saw the tenderness in Seth Dalton's eyes when he looked at her children--not to mention her--it was impossible for her to believe it was all a game.

SHE HAD ONE TO PROTECT...

She was new to this small town, a school principal who needed to be respected. The last man she should be getting involved with was the Hunk of Cold Creek! But every time Seth came near, Jenny could feel herself falling...like all of the women who'd come before her. So why did she hope that her story would have a different ending--as in, happily ever after?

Trope: The Womanizing Charmer and The Prissy School Principal

Dalton's Undoing is Seth's story. Seth is the youngest Dalton brother, and if Wade is serious and grumpy and Jake known to be studious, Seth is the charmer of the lot. He has a reputation in Cold Creek as a womanizer, date them and leave them, although of course he's not exactly a dog either. He's also a hardworking man, kind, giving and sensitive. But, that's not what Jenny hears when she eavesdrops on a conversation between two women at the school where she's the new school principal and immediately forms a negative opinion about this man.

Jenny Boyer recently moved to Cold Creek with her two children. She went through a terrible divorce that left her and her son traumatized and troubled. Moving to this new place in Idaho is the answer to her prayers, particularly for her troubled teenage son, but that doesn't last long. Her son steals Seth's GTO and goes for a joy ride, crashing the car. Jenny is surprised when Seth makes a deal with her, and instead of pressing charges, suggests that the boy pay for the damages to the car by working at his horse ranch. This agreement brings these two very different people together, as well as the Dalton/Boyer families.

Jenny is not Seth's type, but still finds himself attracted to her. He does what he has always done and tries to charm her. On the surface it doesn't work and Jenny rejects him even though she's attracted right back. Initially she becomes a challenge for Seth, but slowly he falls in love with her and with her children. Jenny is attracted to him from day one, however interestingly enough her concerns are not that she's a bit older than Seth or that she's not "good enough" for him, her concern is what "people might say/think" because he's the town bad boy and she's the school principal, God forbid!

This of course doesn't preclude Jenny from having a fling with Seth later. But even when she sees with her own eyes that Seth is a great man with her, her children, neighbors, and family, it doesn't make a difference to her. She rejects and hurts him over and over again, ashamed of being seen or connected with him. This is the real conflict of the story.

This is a HSP, and as such the story is very well developed. The background stories for both Jenny and Seth are well documented, and the children are given a great many pages in this story. This romance is a family affair. Seth develops a relationship with the children first while he plots Jenny's seduction, and although it is clear that he is to blame for his reputation, Thayne doesn't make Seth into a black/white, two dimensional character either.

Jenny on the other hand is pretty standard fare when it comes to heroine material. She is the classic prissy, judgmental, type of woman who jumps to conclusions and won't trust herself or her own eyes even when she says she loves, instead she trusts only when reassured by others. Her love is conditional and as such it doesn't really impress me as real or abiding. So, although Seth shows personal growth throughout the story, Jenny does not. The secondary characters are wonderful, the children in particular are excellent in their characterization, and they also show excellent personal growth in this story.

So how to rate this romance? I again enjoyed Thayne's rendering of her characters, they are flawed and in some ways realistic. I appreciate that. The horse ranch as part of the setting gives this story that wonderful contemporary western flavor I love and that's always a bonus. As the end to the original trilogy, Dalton's Undoing does a marvelous job of taking the whole family and closing a circle. I loved Seth's characterization (his undoing) and the way he falls for Jenny, for that alone this book is worth reading. So I do recommend the trilogy with Book #1 being the weakest, Book #2 the strongest, and this book, #3 falling in between.

Series:
Light the Stars #1
Dancing in the Moonlight #2
Dalton's Undoing #3