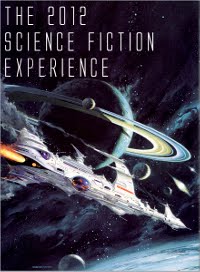 The 2012 Science Fiction Experience hosted by Carl V. of Stainless Steel Droppings was a quick, short term non-challenge that I joined for a period of two months, from January 1st through February 29, 2012.

Carl V. made this a cool experience by giving the participants the choice of discussing everything science fiction: from movies to books, to well... anything. It was fun! I participated by watching quite a few movies, more than I posted about, and reading quite a few books, again, more than posted on my blog. I also ended up purchasing MORE books for that ever growing TBR pile after reading some of the reviews posted by my fellow participants, and adding some old favorites for re-reading purposes in ebook format.

At the beginning of this experience I had in mind two series and authors whose works I wanted to read, but was not sure which one I would choose. I ended up finishing one series, and began the other. So not too bad! Here they are:
Below is a summary of my posts for The 2012 Science Fiction Experience. I've also listed the titles of all books read, and movies that I remember watching.

Movies Watched (watched more!):
Thank you, Carl V., I had a blast!