Joining the 2012 Science Fiction Experience has made me crave not only books, but also science fiction movies! Now, I'm not talking about the best of the best here... I do love those: Star Wars (the original series), Blade Runner, The Matrix, Alien, a few of the Star Trek movies, etc. I also happen to have a secret passion for "B" movies. You know... the ones that get the dreaded "Rotten Tomatoes" ratings every year, the ones that the critics hate and that serious science fiction fans can't stand to watch? Those.

So, I began by watching some of those movies that I know are flawed (some of the seriously flawed), but that for some unknown reason I get stuck watching anyway. It's interesting because here and there these movies all offer something to science fiction fans. I looked for that this time around instead of doing what I usually do -- talking through most of the movies, pointing out what's wrong with them to my poor husband (who does the same thing to me), or just laughing at the most inappropriate moments, it's fun! 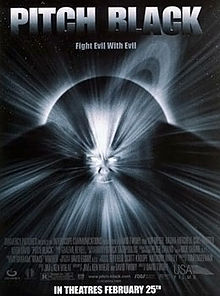 The first movie I watched was Pitch Black. Pitch Black was directed by David Twohy and stars Vin Diesel. Why do I watch this movie? I enjoy the action, the fact that in effect it has that sci-fi/thriller/horror edge to it with the aliens providing the gore, while some of the humans provide the real horror through their questionable actions. They prove to be the true monsters to be conquered by the oh so very dark hero, Riddick. Of course the thriller aspect of the film is still provided as those same humans are pitted against the aliens. It's nothing new or fresh in science fiction, but I do enjoy that type of story line within this genre.

Now, when it comes to the actual sci-fi details and world building, the story is lacking and the action aspect of the film takes precedence over character depth or specific details. This is where Pitch Black falls under the "B movie" category for me. A great science fiction film is all about the details, and those are missing. For example right at the beginning of the movie the pilot (Caroline Fry) crash lands the ship on the planet after they are hit by debris from a comet. However there's no way she could have survived the crash as all the windows of the ship burst right on her face as they are entering the planet's atmosphere at top speed. Later on, Fry should not have survived her foray into the alien's cave either, but obviously it wasn't her time to die yet.

There's also the planet itself and the fact that seems to be very close to three suns, with desert-like weather and blistering temperatures. The survivors are not prepared for a trek through this blistering desert. They don't have the right gear, nor do they have water... yet they survive a long trek by drinking alcohol without any outward effects. And then there's Riddick, the questionable hero of the piece. He obviously has abilities that are beyond those of a mere human. For example, he can see in the dark, but the rest is basically implied. In Pitch Black, Riddick is just a very dangerous criminal who somehow can survive in the dark when others can't, can smell when someone is bleeding (even though this is not apparent), and can even fight the native aliens and win, but how he does this is never explained. Ever. Not even at the end of the movie.

There are also lots of cliches used in the film. Most of what happens is foreshadowed. You know when someone is going to bite the dust, or make the stupid move that's going to get someone killed. This is not a movie I recommend as a great example of a science fiction film. However, as an action film with some of that science fiction flavor it can be highly entertaining to watch on a Sunday afternoon.

There's a sequel to Pitch Black, The Chronicles of Riddick where Riddick's abilities are explained. I've also seen that film, but that would be another post. :)

I did watch two other movies in the "B movie" category:

Soldier is a 1998 science fiction-action film directed by Paul W.S. Anderson. The film stars Kurt Russell as Sgt. Todd, a soldier trained from birth. This was one of the biggest flops ever in the history of film! There's some military sci-fi action in this film with a bit of social sci-fi. The problem is that neither is really developed and the film devolves into an action film that doesn't really make a point either way.

The interesting factoid about this film? The screenwriter David Peoples "considers Soldier to be a "sidequel"/spiritual successor to Blade Runner." Ahhh, nope! Sorry, but I don't see it.

The main characters, three young adults band together in order to take down the "Division", a government agency that is developing a dangerous drug to enhance their powers, hoping to create an army of super soldiers. This was an interesting movie with a good premise I enjoyed, even as I watched the dead end action scenes that had no real purpose and its inconclusive and sequel-bating ending. This movie is like an episode in an ongoing series with no real conclusion. Incomplete.

That's it for my science fiction "B" movie watching. That was fun!
Posted by Hilcia at 10:06 AM