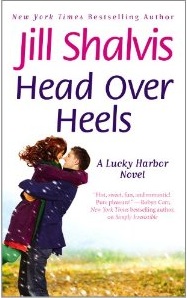 Free-spirited Chloe lives life on the edge. Unlike her soon-to-be married sisters, she isn't ready to settle into a quiet life running their family's newly renovated inn. But soon her love of trouble--and trouble with love-draws the attention of the very stern, very sexy sheriff who'd like nothing better than to tame her wild ways.

Suddenly Chloe can't take a misstep without the sheriff hot on her heels. His rugged swagger and his enigmatic smile are enough to make a girl beg to be handcuffed. For the first time, instead of avoiding the law, Chloe dreams of surrender. Can this rebel find a way to keep the peace with the straitlaced sheriff? Or will Chloe's colorful past keep her from a love that lasts . . . and the safe haven she truly wants in a town called Lucky Harbor?

I enjoyed the first book in Jill Shalvis' Lucky Harbor series and loved the second. The third installment Head Over Heels, is a great follow up to those two first books.

Chloe is the youngest of three half-sisters who inherited the Lucky Harbor Inn. She's also the one who seemingly inherited some of their mother's free spirit and love of adventure. Her biggest struggle so far has been committing to living in one place, and although she loves the town and is helping her sisters get off to a good start by renovating the Lucky Harbor Inn, she still takes off whenever the bug hits. Chloe's other problem is that she loves to get involved in troubled situations, and in a small town like Lucky Harbor trouble means face-to-face time with sexy sheriff Sawyer Thompson.

Something has been brewing between Chloe and Sawyer ever since the sisters came to town. Sawyer knows Chloe can't pass up a challenge or a scrape, and by now he knows her pretty well since he has been keeping a close eye on her. Maybe too close an eye. Chloe's personal challenges and adventurous spirit call to the straitlaced sheriff's own dark, wild side, and the chemistry and sexual buzz that surrounds every encounter between them is driving Sawyer to distraction.

As in most of Shalvis' contemporary reads, Head Over Heels oozes sexual tension. Chloe and Sawyer's relationship is certainly built on a sizzling chemistry from the beginning that goes on to drive both of them crazy -- and the readers to want more of the same. Excellent. The romance or love between them is another matter altogether, that is slower to develop and tougher for either of them to admit.

On the surface the conflict between this couple is one of "we don't fit," but beneath that surface the real conflict is, "we are not good enough." Why? Yes, it's true that they seem to be different: she's wild and he's the law. However, truthfully once all the cards are on the table, they're a lot more alike than either of them want to admit. They both struggle with insecurities and/or past histories to come to that all important happy ever after.

Throughout the story some of Chloe's behavior comes off as immature due partly to her insecurities, and the over protective behavior by her two sisters comes off as over the top. Her sisters' reactions to her business proposal are understandable to a certain point, and thinking about Chloe's past deeds as the "wild child," also understandable to the reader. However, it still bugged me that Chloe's sisters had such little faith in her, particularly since she had been keeping up her own business all along. They couldn't see past the "wild," or the "child."

Sawyer on the other hand shows his protective side to Chloe without making her look or feel like a little girl. He treats her like a woman all the way. The sheriff is a man with a past history of wild behavior who has worked hard at redeeming himself by strictly following the law, but although he doesn't like to admit to it, he also knows how to show love and compassion.

I enjoyed the romance and the chemistry between Chloe and Sawyer in Head Over Heels. Sawyer is an excellent, passionate lover who cares about his partner and turns out to be a lovely, lovely man. He particularly shows this side of himself in the way he treats Chloe's chronic asthma.  Actually one of the things I liked most about Sawyer is that he loves Chloe just the way she is -- free spirited and adventurous. And Chloe? She loves her straight laced, passionate sheriff (and his handcuffs) just the way he is too. These two people are both understanding, passionate, and more lovable that either believe they can be.

The sisters and Sawyer's friends, Jax and Ford, return as secondary characters in this story. The guys have a great relationship full of fun, "guy-like" moments. The townspeople again play a peripheral role that adds to the romance, however, for some reason as a whole their contribution did not strike me as amusing or well rounded as in the previous stories -- and I missed Mia as an important part of the family. There is a secondary storyline with a drug investigation that involves Sawyer and in the end Chloe, plus a personal thread relating to Sawyer's personal relationship with his father. I found both to be appropriate to Chloe and Sawyer's conflict and need for a resolution.

I enjoy Jill Shalvis' contemporary romances and Head Over Heels is no exception. It's a great addition to the Lucky Harbor series. I look forward to reading the continuation to this series.