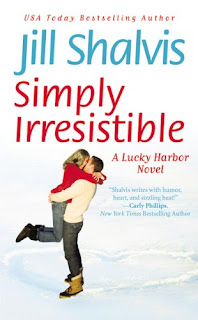 In one fell swoop, Maddie loses her boyfriend (her decision) and her job (so not her decision). But rather than drowning her sorrows in bags of potato chips, Maddie leaves L.A. to claim the inheritance left by her free-spirited mother-a ramshackle inn nestled in the little coastal town of Lucky Harbor, Washington.

Starting over won't be easy. Yet Maddie sees the potential for a new home and a new career-if only she can convince her two half-sisters to join her in the adventure. But convincing Tara and Chloe will be difficult because the inn needs a big makeover too.

The contractor Maddie hires is a tall, dark-haired hottie whose eyes-and mouth-are making it hard for her to remember that she's sworn off men. Even harder will be Maddie's struggles to overcome the past, though she's about to discover that there's no better place to call home than Lucky Harbor.

I waited long enough to read Simple Irresistible, Lucky Harbor, Book 1 by Jill Shalvis, why? I should have known better, since Shalvis is one of my favorite category romance writers at the moment.

Maddie Maddox and her two half-sisters, Tara and Chloe, inherit an inn in Lucky Harbor, a small town in Washington State. After losing her job and her jerkwad boyfriend, Maddie decides to give up on men and leaves L.A. She hopes to run the inn and to make a new life for herself in Lucky Harbor. There are, however, obstacles to her plan: she must convince two half-sisters she barely knows to let her stay, fix up an inn that is badly in need of repair, and Maddie, who's suffering from low self-esteem, must find the courage to do it all.

Jax and Maddie meet right off the bat when Maddie comes to town in a first scene that I absolutely adored -- I mean... Maddie couldn't be more adorable or Jax hotter! Needless to say soon after that, there's an attraction between the two and they are drawn to each other. Jax or Jackson Cullen seems to be a jack-of-all trades in Lucky Harbor, but most importantly, he's the contractor the sisters hire to renovate Lucky Harbor Resort. There's sexual pull between this couple from the beginning and the chemistry continues throughout the story. Shalvis tops all that sizzle by mixing those hot, sexy moments with amusing dialogue and humorous scenes. I personally loved the combination.

Jax and Maddie do have some serious personal issues to resolve before they get to that happily ever after. This is where I had a slight problem with the book where I found that the characterization was slightly unbalanced. We get an in-depth look into Maddie's life, troubles, motivations and the reasoning behind her decisions. There's character depth and growth for her... even though some of Maddie's characteristics were frustrating for me personally. When it comes to Jax, well... I really liked him and his outward persona, plus I loved the way he understood and encouraged Maddie toward personal growth. However, I feel that although his serious issues were addressed to a certain extent, we didn't really get an in-depth look into the past relationships that shaped him and I was left waiting for more.

The three sisters have nicknames and Maddie is the "mouse" for good reason. She is the middle sister who constantly negotiates peace between her two strong, feisty sisters, and yet can't seem to find the courage to stand up for herself. These three women have their mother in common but not much else, and it's lovely to see Maddy fighting to forge a relationship with them, as well as to make a future at the Lucky Harbor Inn. As secondary characters I loved the sisters, Tara and Chloe -- their secrets and fights made this an entertaining read. Ford, Jax' best friend, was a hoot and I loved him too!

In summary, I think that Simply Irresistible was a solid contemporary romance with lots of spark and sizzle, Shalvis style. I loved that although there were strong secondary characters, the story maintained its focus firmly on the main couple, making this a true contemporary romance. The main characters were likable, and although the in-depth characterization was slightly unbalanced in my opinion, this did not detract from making Simply Irresistible a solid romance read. The secondary characters were a big asset and perfect for setting up future installments in this series, and I'm really looking forward to reading Ford and Tara's romance in the next book, The Sweetest Thing.