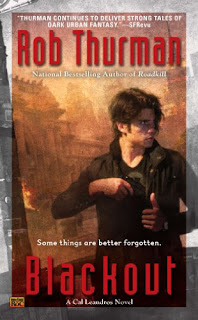 Well, Blackout was a surprise! After reading Roadkill, I was expecting dark and downright bloody. Instead Rob Thurman takes Cal and the reader on a trip to Neverland. Yes you heard right, it is Peter Pan all over again. The boy who didn't want to grow up and forgets his family because it's so much fun and easier to live a "let's pretend" life, than it is to live with reality. Thurman even reprises her own version of the land of "lost boys."

The story begins with Cal waking up alone on a deserted beach gripping a handgun, a bunch of dead, giant spiders around him and no memory of whom he is, where he is or why he's there. The one thing Cal knows for sure is that he's a killer and that there are monsters in the world -- the gun, the blood, his cool reflexes and the dead spiders prove it. But is he a good killer or a bad one? He searches for this answer throughout the whole story.

Eventually Cal finds out that he is in Nevah Landing, a small town in South Carolina. He is sure he doesn't belong, but although lost and with no memories something tells him he's supposed to be there. Our boy Cal winds up working as a waiter on a diner with Mrs. Terrwyn as her boss, and constantly attempts to convince himself that he is a worthy human being. A different Cal is emerging.


"That meant something. When all you know is that you have snarky tastes in T-shirts and you're a killer of monsters and you pass Miss Terrwyn's good-character test, you had to think maybe you weren't too bad. If I'd killed monsters, then I'd saved innocent people. I defended the honor of teen girls from perverts, even if I overreacted somewhat. I wasn't such a bad guy."

However, this situation doesn't last long as Niko and Robyn find Cal and take him back to New York City. There, he finds out what it means to have a brother and what he really does for a living. Cal's problem? He's having "trouble getting it through his head that monsters or non-humans aren't always evil." He thinks of them as "abominations." This poses a problem for Niko, Goodfellow and the rest of his friends, as they all have to basically lie to Cal while they continue to work on a new contract, hunting down a soul-sucking Egyptian goddess who is after them.

This "new" Cal might be suffering from amnesia, but he is still sarcastic, lazy, sloppy and loves his guns. The difference is that he's an almost happy, human Cal now, less impulsive and more thoughtful. I believe we've caught glimpses of this side of Cal in previous books (particularly in the first book), but never to this extent. Cal without the Auphe. The entire book is narrated from his point of view with his dark, snarky humor, as well as the angst and a certain... innocence and honesty made this character driven novel a different read within this series. The action is still included, but in reality Blackout is more about the changes Cal is going through and his interactions with Niko, than the monster hunting. There are some really funny moments too: Cal wearing a gingham apron; Cal giving Goodfellow fork-phobia; the cats! I loved them all.

Niko also plays a large role in this story, as he goes through some incredible changes along with his brother. He is affected by what he thinks of as losing his brother to amnesia and frankly, I was shocked by some of the things that happened between the two of them in this book, particularly some of Niko's actions. He's just such a lovely character -- too perfect? Yes, and no, sometimes... but still lovely. Goodfellow is his wonderful, egocentric self and I love every instance he is on the page, as he makes the most of his monogamy and being a true friend. The rest of the secondary characters, particularly Promise  who is just a non-issue, don't play much of a role in this book, with Delilah a problem that is obviously being left for later.

On the surface Blackout takes Cal's character backward. He's a blank slate and has to re-learn everything about himself, but in reality this is big leap forward for him. This is where Cal finally comes to terms with what and who he really is, for better or worse. There's much needed character growth for him and in my opinion this was well done by Thurman, even with the repetition found throughout the text and Cal's long internal dialogue.

Blackout was a great addition to this series. I admit to being initially disappointed and not understanding why Thurman was taking Cal's character backwards, I wanted dark Cal back. But as the story went along, the more I read the more it made sense to me. I absolutely loved the ending and that last line! Cal is now ready for what may come next -- Delilah, and/or whatever monsters are lying in wait in the dark, himself included. Bring on the next book!