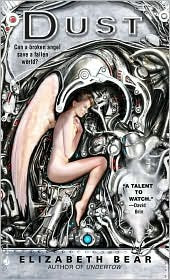 Dust by Elizabeth Bear is the first book in the Jacob's Ladder trilogy, a 2007 release. The trilogy is categorized as science fiction, however I found enough fantasy elements in this first book that places it firmly into the science fiction/fantasy category for me. This didn't surprise me overmuch after having read some of Bear's other works and discovering her talent to seamlessly weave fantasy with mythology, so why not with science-fiction?

Let's begin with the science fiction setting and details. Our characters' "world" is the massive generational colony ship the "Jacob's Ladder.” While on their way from Earth to a new planet, the ship broke down and has been orbiting twin-dying suns for centuries as the inhabitants themselves survived by evolving. This evolution was originally forced on some of the inhabitants by the ship (or ship's computer program) through a symbiosis between nanotechnology colonies and their human hosts, creating the Exalts. These symbionts heal wounds making Exalts nearly indestructible, with the exception of a wound received from unblades or swords created specifically to kill Exalts. Evolution has taken different forms and there are a myriad of characters encountered throughout the story, from winged angel-like humans to sentient entities that are created from nanotech colonies.

When the ship first broke down and the main frame "computer" (Israfel) failed, it splintered into different sections: (Jacob Dust) Memory, (Samael) Biosystems and Life Support, and the ship's (Asrafil) Weapon's Systems. They all work and control the ship, but must be accessed as separate entities.

Now we get into the fantasy aspects of the story and the fun! Did you notice the names above in parenthesis? Each of those splintered computer programs is characterized as an "Angel" in Dust. Jacob Dust is the Angel of Memory, Samael is the Angel of Biosystems and Life Support and Asrafil is the Angel of Blades or Weapon's Systems. They are all that remains of Israfel or as they refer to him, God. Since the Angels can’t agree on how to save the “world,” they are at war with each other and manipulate humans and circumstances to survive. The three Angels have one goal: to consume the other two and gain their knowledge until there is only one left.

Bear takes a broken down ship in the middle of space and creates a whole world out of it with cities, societies and customs. The most recognizable concept in Dust is that of a medieval society. There are the ruling noble houses -- the House of Rule and the House of Engine (or the Commodore's Quarters and Engineering) -- knights, quests, chivalry, honor, political intrigues, inheritance issues, war, swords, servants, ancient bloodlines, and even names like Sir Perceval, Tristan and Benedick. Then Bear mixes in not-so-subtle religious references -- God, Angels and even a depiction of the Garden of Eden -- with a necromancer, a dragon and a basilisk along the way. It's quite the smorgasbord, yet it all fits together and it made this an exciting read.

The story seems simple enough; the world is in danger from two different fronts and it must be saved at all costs. Sir Perceval, a knight from the House of Engine is captured by Ariane, a Princess from House of Rule, and surrenders honorably. Ariane severs Perceval's wings with her unblade, committing a dishonorable act that will trigger a war between the two Houses. Ariane's father, the Commodore, reprimands her for her actions and she responds by killing and consuming him to acquire his knowledge and memories. At this point it's clear that Ariane is making a move to control House of Rule and Engine. In the meantime Rien, a servant girl tending to Perceval, makes a few surprising discoveries and the two girls escape and embark on a journey throughout the ship to stop a war between the two Houses.

Perceval finds herself as the center of the conflict between the "Angels" and the war between the Houses. However, it is Rien who really effects the changes in this story and turns out to be the courageous "knight" of the piece. As the character with the most growth from beginning to end, she became a favorite. Rien begins as a fearful servant who is Remade by Perceval from a Mean (a human who doesn't have a symbiont) into an Exalt, and after unknowingly consuming the memories of the original Chief Engineer and finding her family, her strength of character really comes through. Jacob Dust was also a fascinating character that took me for a ride from beginning to end by just trying to figure him out. I also loved his interactions with the other Angel entities and Perceval.

Of the main characters although Perceval was well developed, she was also my least favorite as I found her to be emotionally weak. On the other hand, there were secondary characters that were key to the story -- Tristen, Benedick and particularly Ariane -- who either piqued my interest or were likable, but whom I thought could have used further development within this first book.

In the other works I've read by Bear, she approaches sexuality openly through her characters. In Dust she includes a hermaphrodite, an ungendered character, one who chooses to be celibate, homosexuality, and taboo subjects. I loved Bear's seamless weaving of science fiction and fantasy and again enjoyed her approach to sexuality through characters and how she makes it all work.

Dust is well plotted, has excellent pacing and fascinating world building. I enjoy Bear’s writing style and this book is no exception. However I did have a problem with the very beginning of the book where I felt the story was bit rushed and lacking in detail. It took a couple of chapters for everything to “gel” for me. Once it did, the story took off and I couldn’t stop reading.

This is the first book in the Jacob's Ladder trilogy and obviously there's more. Bear ties up the most important threads of this particular story -- Perceval, Rien, the war between the Angels and the “world’s” immediate fate -- but there's more. The story ends with a bang, and I mean of epic proportions, and at this point I was glad I had the second book, Chill, available to read immediately as I became obsessed with this world's fate. This is a book I recommend for those who love science fiction, fantasy, or just a great adventure full of creativity and fantastic characters.