Review: The Shattered Gates (The Rifter, Book 1) by Ginn Hale 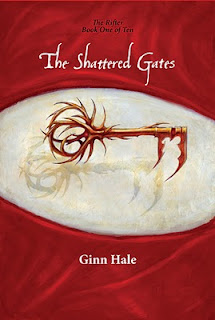 When John opens a letter addressed to his missing roommate, Kyle, he expects to find a house key, but instead he is swept into a strange realm of magic, mysticism, revolutionaries and assassins. Though he struggles to escape, John is drawn steadily closer to a fate he shares with Kyle—to wake the destroyer god, the Rifter, and shatter a world.

The Shattered Gates is Book 1 in Ginn Hale's brand new ten part serialized fantasy series, The Rifter. It is tough trying to review the beginning of a book instead of the whole thing, so I'm just going to give you my impressions on the world building and her introduction of characters at this point.

Ginn Hale begins the story in our contemporary world with John opening a letter addressed to his unusual roommate Kyle. The letter contains a key and John keeps it. In the meantime Kyle or Khalil is fighting a war in his own world. A strange world where there are such things as oracle bones and talking dogs. After a series of unusual events, John uses the key and unwittingly opens a gate that transports him and his two closest friends to a strange and hostile world where they find themselves trapped. When Kahlil realizes what has happened, he attempts to follow John through the gate. He arrives at a place that is both familiar and yet different. Kahlil finds himself alone as all he knows seems to be gone forever.

The initial part of the world building in this first part of the book was excellent. It's easy to understand and follow and fascinating enough to hook the reader. Of course there's still much left to develop, but having read this first episode, there's no way I wouldn't continue reading this book.

The characters are also interesting, although at this point the world caught my attention much more. Hale concentrates a bit more on John's development than on Khalil in this episode, but there's enough information about both characters to give the reader an idea of what is to come. John has an affinity with the earth itself and seems to receive comfort from it. He's a bit of a lone wolf and although he shares part of himself with his friends, there's a lot there within him that's still unknown. I want to know the reason behind some of his reactions and can't wait to see where his character goes from here. Khalil is even more of a mystery as the reader receives only enough information to wet the appetite. We know he was chosen as the protector of his world and somehow failed by not keeping John from going through the gate. I can't wait to read more about him.

The Shattered Gates was engrossing. I was transported to this world and wanted to know more about these characters and the events that were taking place. Of course the tough part is waiting for that next episode to come along next month! This was a solid beginning to this serialized fantasy series.