Wow, almost end of year! Again I've decided to combine new releases I'm looking forward to reading for the next couple of months: November and December. I don't have too many books on my list, but the ones I do have are the sure thing.

When it comes to genres, this time it seems as if I have one of each and some books are by some of my very favorite authors. In my list I'm including Happy Ever After, the last book in Nora Roberts' gorgeous contemporary romance Bridal Quartet series; Play of Passion, another installment in Nalini Singh's Psy/Changling paranormal romance series; the amazing looking cross-genre anthology Songs of Love and Death, which includes fantasy, science fiction and romance, edited by George R. R. Martin and Gardner Dozois, this is not one I'm missing; Marry Me by Jo Goodman, a historical romance that looks sweet and it's set in the West; and The Duke & The Pirate Queen by Victoria Janssen an erotic romance by an author whose writing style I enjoyed earlier this year and want to try again. 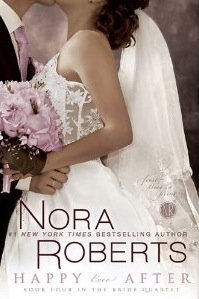 
As the public face of Vows wedding planning company, Parker Brown has an uncanny knack for fulfilling every bride's vision. She just can't see where her own life is headed. Mechanic Malcomb Kavanaugh loves figuring out how things work, and Parker is no exception. Both know that moving from minor flirtation to major hook-up is a serious step. Parker's business risks have always paid off, but now she'll have to take the chance of a lifetime with her heart... 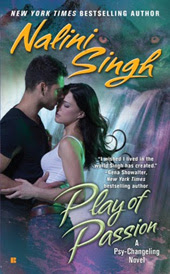 
Passion and reason collide with explosive force in the newest installment of Nalini Singh’s “mesmerizing”* Psy/Changeling series. As a conflict with Pure Psy looms on the horizon, two powerful wolves fight a far more intimate war of their own…

In his position as tracker for the SnowDancer pack, it’s up to Drew Kincaid to rein in rogue changelings who have lost control of their animal halves—even if it means killing those who have gone too far. But nothing in his life has prepared him for the battle he must now wage to win the heart of a woman who makes his body ignite…and who threatens to enslave his wolf.

Lieutenant Indigo Riviere doesn’t easily allow skin privileges, especially of the sensual kind—and the last person she expects to find herself craving is the most wickedly playful male in the den. Everything she knows tells her to pull back before the flames burn them both to ash…but she hasn’t counted on Drew’s will.

Now, two of SnowDancer’s most stubborn wolves find themselves playing a hot, sexy game even as lethal danger stalks the very place they call home… 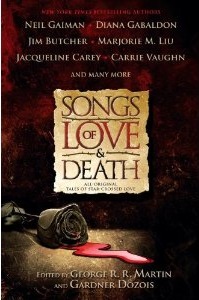 
In this star-studded cross-genre anthology, seventeen of the greatest modern authors of fantasy, science fiction, and romance explore the borderlands of their genres with brand-new tales of ill-fated love. From zombie-infested woods in a postapocalyptic America to faery-haunted rural fields in eighteenth- century England, from the kingdoms of high fantasy to the alien world of a galaxy-spanning empire, these are stories of lovers who must struggle against the forces of magic and fate.

Award-winning, bestselling author Neil Gaiman demonstrates why he’s one of the hottest stars in literature today with “The Thing About Cassandra,” a subtle but chilling story of a man who meets an old girlfriend he had never expected to see. International blockbuster bestselling author Diana Gabaldon sends a World War II RAF pilot through a stone circle to the time of her Outlander series in “A Leaf on the Winds of All Hallows.” Torn from all he knows, Jerry MacKenzie determinedly survives hardship and danger, intent on his goal of returning home to his wife and baby—no matter the cost. New York Times bestselling author Jim Butcher presents “Love Hurts,” in which Harry Dresden takes on one of his deadliest adversaries and in the process is forced to confront the secret desires of his own heart. 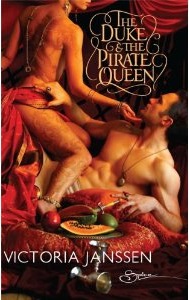 
Aboard her privateering ship Seaflower, Captain Imena Leung is the law. Ashore she answers only to her employer, Duke Maxime. They are a powerful couple, with an intense attraction neither can disguise or deny. As a nobleman, Maxime is destined to wed strategically, so his seductive advances must be purely for pleasure. And what self-respecting pirate denies herself any pleasure?

Their delicious dalliance is prolonged when Imena is forced to abduct Maxime to foil a political plot against him. At sea, with a stunningly virile man bound in her private quarters, Imena can imagine--and enact--any number of intoxicating scenarios.

The heat between captain and captive is matched only by the perils that beset Seaflower and her crew. Violent storms, marauding corsairs and life-or-death sex games on a desert island--how fortunate for the seemingly insatiable lovers that danger and desire go hand-in-hand. 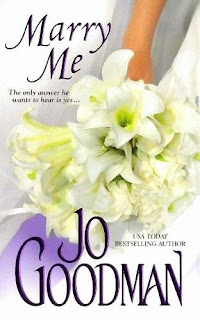 HER HEART WAS LOCKED AWAY

Rhyne Abbott is fierce, brave, and used to a life of isolation on her father's spread on the outskirts of Reidsville, Colorado. But when, overcome with sickness, she collapses, she knows she must return to town if she is to have any hope of recovery. Only there is no place for her but the new doctor's home, and he wants more than just to heal Rhyne. He wants her hand in marriage.

UNTIL ONE MAN FOUND THE KEY

Doctor Cole Monroe's hands are already more than full with his orphaned little sister to look after, and yet somehow he can't resist the magnetic pull of Rhyne's bewitching eyes—or her tempting kiss. But convincing her to trust him won't be easy. For Rhyne's heart needs as much tender care as her ailing body. And the only cure is the thing she most fears: to let herself fall in love...

As you can see I've highlighted a bit of everything on my list. What about you, any good recommendations for November and December? What books are you looking foward to reading?
Posted by Hilcia at 11:28 AM