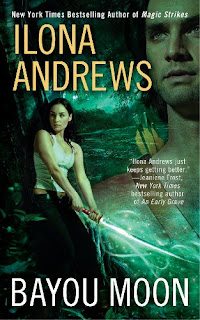 Last year I fell in love with Rose, Declan and the boys when I read On the Edge and was quite curious about William the Wolf, as well as life on the Edge. Bayou Moon continues two years with William's story and takes the readers to the Mire, a swampy bayou on the Edge that's full of magic, great characters, family feuds, evil, and life and death situations.

Bayou Moon is a long book and I must admit that it didn't grab me from the beginning with the same force as On the Edge, yet I liked it just as much. Andrews' well-defined and fascinating worldbuilding continues in this story. The Mire, a place within the Edge, is detailed and described so well you can almost smell it, taste it and feel it. Ugh! There are creepy crawlies and characters in that bayou that will definitely make your skin crawl, and they fit the story and the setting perfectly. The Mire is on the border with the Weird's Dukedom of Louisiana, becoming a natural dumping ground for exiles and criminals alike. Magic flows strongly, not only from the new criminal and villainous element, but also from the exiles' families and descendants.

This is the world that William walks into and he hates it -- all the damp, mud, rain and weird creepy crawlies, he just wants dry socks lol! For the past two years he has been living a boring and lonely life. He's reading a letter from Jack and George and talking to his action figures (yes, action figures) when Mirror agents, the top Andrianglian spies or special ops, show up at his doorstep. William agrees to spy for them again once he finds out that his archenemy Spider is at the Mire seeking a weapon hoping to start a war between the Louisianans and Andrianglians.

While the Mirror is recruiting William, Cerise Mar is having troubles of her own. Her grandparents home has been taken over by a feuding family and her parents have been kidnapped by the Hand, a criminal gang feared for its powerful and dark magic. Until her parents return, Cerise is head of the vast Mar clan and needs to make some quick decisions or none of them will survive, but first she must go into the Broken. On her way back, she meets William.

William and Cerise embark on a dangerous journey through the bayou as strangers and soon become allies through necessity. William hates the bayou and Cerise knows it and can't help but use it against him. He hates being dirty, the mud, the dampness, the strange creatures -- his internal thoughts on the subject had me laughing and agreeing with him through much of the story. I enjoyed Cerise and William's dialogue and loved the combination of acerbic comments with light banter and fast paced action, as this couple begins by taking each other's measure and not liking what they see, moving on to admiration, then lust and later on to love. The development of their relationship is not an easy one, as they're quite busy fighting evil or often ruthlessly interrupted by Cerise's vast family, but the Andrews team manages to do it quite well.

I liked William in On the Edge and I liked him even more as Bayou Moon unfolded. He's a man full of contradictions -- a natural born killer, ruthless, cold, loyal, loving, tender, and also a man attempting to recapture a childhood that was stolen from him. I also loved Cerise as the strong and powerful leader of her family clan, with her uncertainties, vulnerabilities and vast responsibilities. She carried it all quite well. Cerise was ruthless when necessary and I loved how she used her powerful magic, and her absolute belief in her abilities. The way Cerise fell for William fit her character perfectly too. She was passionate about him and fell in love with eyes wide open -- no rose-tinted glasses for our Cerise.

I could go on and on about the secondary characters, they were all excellent. Kaldar and Richard, Cerise's cousins stand out in this story, as does her sister Lark. I hope that the Andrews team will write their stories in the future. I did have a question about the family in the end that was not answered and that was a bit of a disappointment.

With Bayou Moon, the Andrews team continues the outstanding worldbuilding they began with the first installment of this series, as well as with excellent central and secondary characters that carry a fast paced story full of romance, action, creepy villains, battles, victories and deaths.There were a couple of interesting open-ended threads that I'm sure will be addressed in the next installment (no cliffhanger). And believe me, I can't wait to read the next book.