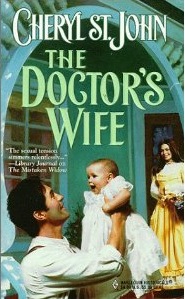 How could she say yes?
People like Ellie Parrish did not get proposals of marriage from someone like Dr. Caleb Chaney. Even if his offer was the answer to her prayers, a man as decent and kind as Caleb didn't deserve a woman whose past was a lie.

The Doctor's Wife by Cheryl St. John is a Harlequin Historical romance I received as a gift from Leslie, and one I've had on my "to be read" pile for a few months. This is another well-written, heart warming historical set in the West by St. John.

In this story, St. John focuses her story on rank poverty in the West and how society viewed and treated those who were less fortunate. The heroine is the daughter of a prostitute. Ellie raises her two younger brothers in squalor from the time they're born until their mother dies and the boys are taken into foster care as free farm laborers. They've all been victims of violence throughout their young lives and Ellie herself was raped at age fourteen (the rape is alluded to, briefly sketched in the book, although not detailed). She changes her name and leaves town, finding a job as a waitress in a decent hotel and is saving money so she can bring her brothers to live with her.

Ellie meets Caleb, a doctor, when she breaks her arm. Caleb is a widower and a single father. After a series of events, Ellie agrees to take care of his infant son while he takes care of his practice. Eventually, Caleb recognizes that Ellie would make a good wife and wonderful mother to his son and proposes marriage.

The story deals with Ellie's self-doubts as she and Caleb embark on a relationship. She confronts different issues including trauma from the rape, the physical abuse that she and her brothers received throughout childhood and her personal shame. Ellie is a strong protagonist with a tough past and little self-esteem -- plus other concerns include the lies and omissions she uses to obfuscate her past. Caleb on the other hand is a wonderful man and portrayed as straight forward, compassionate and understanding, an almost perfect man at times. St. John incorporates all of the above while slowly, but surely, developing Ellie and Caleb's romance to make it believable. Secondary characters, particularly Ellie's brothers, give depth to this story and have much to contribute.

The Doctor's Wife was an emotional read for me. Although lukewarm when it comes to the romance, it's quite heart warming and family-oriented with excellent characterization, plot development, and a well-deserved happily ever after.