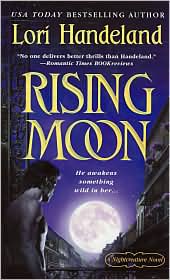 Over a city of wicked pleasures and dangerous passions...

Denizens of The Big Easy know its steamy nights can hide any number of sins and secrets. Private-eye Anne Lockheart is counting on it. Her life has been in a holding pattern ever since her sister Katie disappeared without a trace...but when a leads Anne to a jazz club in the French Quarter, everything changes. Rising Moon's proprietor, John Rodolfo, is mysterious in his own right, a gifted musician who reaches deep into Anne's soul and whose mere presence taps into desires she can't afford to indulge...there's a bad moon on the rise.

By going undercover at the Rising Moon, Anne can get close to people who know what goes on after dark--people like John, whose nocturnal disappearances are more than a little suspicious. But unlocking John's secrets is harder than Anne had anticipated. What's far too easy is surrendering to him. And now someone--or something--is stalking the innocent and the guilty, and waiting for Anne's next move...

I read the entire paranormal Nightcreatures Novels series by Lori Handeland a while back and of all the books, the three novels set in New Orleans (Crescent Moon, Midnight Moon, Rising Moon) are my favorite, and Rising Moon (Book 6) is at the top.  I remember writing the following note the first time I read this book back in February, 2008:


Rising Moon. I loved, loved, this book. I have to say this is my favorite of all the books set in New Orleans. The romance was great. John was great! The mood of the book was the best and the monsters were excellent because well... that whole gray area again -- good/evil -- who knows?! Will we meet (some of the characters) again? I wonder....

In that little note my reasons for loving this book were sketchy at best, although the meat is there. In Handeland's hands New Orleans becomes more than a setting, and as I re-read this story I again felt transported and through her writing experienced the music, the dark streets, the tastes and smells of the city, the fun and danger. The place attracts and repels the reader, it's both dangerous and beautiful. This sets up an atmosphere that is perfect for this mystery thriller / paranormal romance -- and this story is both.

The characters in this story are just as dark, dangerous and ambiguously attractive as the city itself. Even Anne, from whose perspective we see the events unfold, is not a black and white character. She's conflicted and lies when she has to to accomplish her mission -- that of finding her missing sister. Anne is a private PI with no life, a woman, who by her own admission, is not physically attractive and has no time for sex, men or relationships -- at least not until she finds her sister. That all changes when she walks into the Rising Moon club and meets jazz musician and club owner, John Rondolfo.

John's music is mesmerizing, his looks are hypnotizing and Anne can't seem to keep her eyes off him. But there's something wrong with John. He's beautifully dark and brooding, but he's also obviously deeply hurt and suffering, he's blind but not helpless and people around him and the Rising Moon disappear. Anne goes undercover as a waitress at the Rising Moon, hoping to find her sister and to help police Detective Sullivan find out information about the other mysterious disappearances. Soon Anne finds herself involved with John. He seems to be attracted to her in an almost desperate way, and her attraction for him grows by the minute no matter how dangerous the situation. The hot and steamy sexual scenes between John and Anne are as sultry and sensual as the setting itself.

As the plot moves along, and it moves along at a good pace, it's tough to figure out who is good and/or evil. The secondary characters are just as ambiguously gray as the central ones, making them excellent additions to this story. The reader never knows who to trust, or what twist or turn will come around the next corner. There are dark, scary moments that made my heart beat faster, Anne's TSTL moments (there are always some of those) gave me anxiety attacks, and although there were hints along the way I couldn't wait to figure out who was who by the end. There are all types of legends and monsters: voodoo, werewolves, loup-garou, and of course the Jäger-Suchers (Hunter-Searchers) make a brief appearance.

I enjoyed Rising Moon this time around almost as much as the first time. Anne's decisions (TSTL moments) frustrated me a bit more during this re-read, but not enough to make too much of a difference. This book really is a spooky and steamy read. I enjoyed the twist at the end and what I thought was an excellent resolution. Great read.

The good news for me? After two years, Lori Handeland is again writing Nightcreature novels. A new installment Marked by the Moon is releasing on November 2nd, and I'll definitely be reading that one. :)
Posted by Hilcia at 11:36 AM