...On Romance of Lust by Anonymous 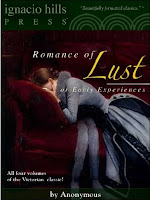 
The novel is told in first person, and the protagonist of the novel is Charlie Roberts. The novel begins with “There were three of us — Mary, Eliza, and myself.” Charlie catalogs his sexual experiences with his governesses, various male and female friends, and acquaintances. The book deals with a variety of sexual activities and taboo subjects.

Words most often used: lascivious, libidinous, lubricity, salacious, gamahuche, voluptuousness and debauchery. References to Venus and other Roman and Greek gods and goddesses are used in conjunction with sexual acts and body parts. French, Italian and Latin are used freely, although many of the common names used by Anonymous are still used today.

As may be supposed, not a bone was to be traced in her upper neck, but all was dazzling in colour and flesh, which is such a beauty in woman. When a woman shows her gaunt collar bones, it is a proof of bad breeding, and a common nature.


In after-life, I have always found the nearer we are related, the more this idea of incest stimulates our passions, so that if even we be in the wane of life, fresh vigour is imparted by reason of the very fact of our evasion of conventional laws.

After reading Romance of Lust or Early Experiences, I will never read a Victorian historical romance where there is a dissolute and corrupt character without thinking of Charlie Roberts. He was portrayed as both and as one who not only relishes but also thrives in corrupting those around him. Charlie has to be the most distasteful character I've ever encountered in a book.

This is an erotic fantasy, not to my taste and definitely out of my comfort zone, yet in reading it I still found some things that interested me, those few glimpses into Victorian society were definitely a draw for me. The use of language and vocabulary, their idea of what constituted beauty and the social commentary about the times that were included in these volumes made an otherwise uncomfortable and unsettling read, interesting. I would like to conclude by saying that if the writer's purpose was to shock his audience at the time these volumes were published, I'm quite sure he succeeded.
Posted by Hilcia at 10:05 PM