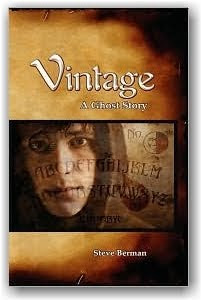 In Vintage: A Ghost Story, Steve Berman writes a chilling tale of ghosts, mixes it with urban myth while capturing Goth youths' subculture, bittersweet first love, teen angst and the small town setting perfectly. A haunting and touching coming-of-age story full of dark humor that encompasses not only the unique struggles of gay teens, but the awkwardness, fears, anxieties and a sense of wonder that all teens can relate to.

The story is told in the first person point of view from our main character's perspective, an unnamed teen. It all begins at midnight on a chilly autumn night on a lonely New Jersey highway. Our young man encounters a gorgeous boy dressed in 50's clothing and after a short conversation the boy seems to just... disappear. This gorgeous apparition dazzles our main character, a shy and insecure young man. He finds out that Josh is an urban myth, the ghost of a young man who died decades ago and has hunted the same stretch of highway ever since. Curiosity, a wish to see beautiful Josh again, and the beginnings of a crush push our character to return the next evening to the lonely highway with his best friend Trace as he hopes for another encounter. He gets his wish... and more. Josh follows him home and our chilling story really begins.

What did I like about this book? It is fast paced, chilling and a real ghost story, no question about it. Josh is not the only ghost to populate this tale and as you can imagine some are nicer than others. There are Ouija boards, an exorcism and a scene in a cemetery that gave me the creeps! There's an offbeat cast of friends who give this story depth and definitely help with the chilling effect -- Second Mike definitely stands out in that respect. Trace, a gorgeous multi-faceted Goth goddess is also a key character in this tale. Liz and Maggie, a young teen lesbian couple, provide a good balance to our main character's personal struggles.

But there's more to Vintage than the chills and thrills. Real-life issues that affect teens are also addressed, some with a light touch and others with a bit more depth. Our cast of characters, from our unnamed young man to his friends, are either plagued by self-consciousness, low self-esteem, peer pressure and/or family issues, as the gay characters have their own added pressures. The social issues and the ghost story are well integrated, as one doesn't overwhelm the other. The characters' struggles and part-resolution become an integral part of the overall speculative urban myth that Berman creates.

Berman's writing style has a lot to do with my enjoyment of this story. Although there are minimal details when it comes to the background and history of the characters themselves, their essence and the most essential part of their past history are captured without lots of unnecessary detail. The same can be said for plotting, the substance is there but it's all done in a precise, sharp and minimalistic style that I enjoyed thoroughly.

Vintage: A Ghost Story by Steve Berman is a young adult book originally released in 2007, and re-released through Lethe Press Books. A finalist for the 2008 Andre Norton Award for best young adult speculative fiction by the Science Fiction and Fantasy Writers of America and in the category of Best Novel for the Gaylactic Spectrum Awards, this is a book that had been on my reading radar for a while and after reading it, I can see why it has received so much attention. I definitely recommend it.