I read this book back in September and I'm very late posting this review! I just didn't want to let it go by the wayside as I reviewed the other three books in this series. So here it is (better late than never, I say, lol!) Deathwish by Rob Thurman. :) 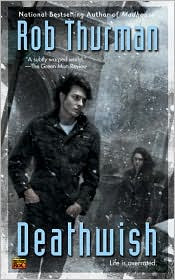 Half-human Cal Leandros and his brother Niko are hired by the vampire Seamus to find out who has been following him -- until Seamus turns up dead (on un-dead). Worse still is the return of Cal's nightmarish family, the Auphe.
The last time Cal and Niko faced them, they were almost wiped out. Now, the Auphe want revenge. But first, they'll destroy everything Cal holds dear...

Deathwish is the fourth book in the Cal Leandros urban fantasy series. Rob Thurman begins Deathwish exactly where the last book ended. This series has a wonderful continuous feel to it, but as Madhouse ended with a cliffhanger it is understandable that this particular book would pick up with the exact same scene.
One of the first things we notice in Deathwish is the change in point of view. The first four books are seen strictly through Cal's eyes. In Deathwish, Thurman uses both Cal and Nick's points of view alternating every other chapter to tell the story. This change gives this book a richness that was missing from previous installments and in my opinion makes the series finally feel complete.
I reviewed the first three books in this series with Nath at Breezing Through, and in those reviews she and I discussed the characterization in this series in depth -- it is the characterization I think is its strongest draw. However, by the third book in the series, Madhouse, I thought Niko had started to become a bit stagnant as a character. By adding Niko's thought process to the mix, Thurman makes him an even more compelling character and adds a different dimension to this wonderful series.
One of the things we gain by this added point of view is that now we get to experience Niko and Cal's relationship through Niko's eyes for the first time. Through flashbacks, we have answers to questions previously left unanswered. We now know both brothers are important to each other's growth -- Niko could not have been who he is without Cal, just as Cal might have been a different being without Niko. The relationship is a balanced one.
The plot is multi-layered and our wonderful cast of characters have more than a few impossible challenges to battle in this installment. For starters the Auphe are back and this time they don't want to kill Cal, they want to take him with them. The reasons behind this are enough to make Cal go mad... or make him suicidal -- Niko is not about to let that happen. But the Auphe don't just want to take Cal, they're determined to kill everyone he loves first and Niko is their primary target -- Cal is not about to let them that happen either.
While all this is happening, Promise, Niko's vampire girlfriend and business partner, finds them a gig as bodyguards to Seamus. He's a vampire and an old friend who needs protection from an unknown entity who is stalking him for no apparent reason. However, Promise has been keeping secrets and as they are revealed things start to snowball as the danger escalates for all of them. Here we meet Cherish, Promise's daughter, a selfish and self-absorbed young vampire who places everyone in danger and who doesn't seem to care about anyone but herself.
Promise is placed in a precarious position with Niko, and he in turn becomes weary of her as he finds out she has been less than honest in their relationship. I liked that there is growth in Promise and Nick's relationship at this point. They experience adversity and we see from their reactions how both characters grow and change. Niko in particular is not as black and white in his approach by the end and that made me like him more.
The worldbuilding continues to grow and in this book Thurman weaved it seamlessly with the plot and the characterization. In particular, a new entity is introduced that I think will be important in the future, the Vigil. This is an organization comprised of humans who are aware of these "otherworldly" creatures and who have been keeping tabs on them for an unknown period of time and have detailed knowledge of them. They've been acting as a sort of clean-up crew and spin stories in the media when there are killings throughout the city. Their purpose is supposedly to maintain the human race safe, but mainly I see it as keeping humans oblivious to this other world. This organization is powerful and has access to weapons and government facilities. There was a hint that this group could be a danger to Cal and Niko in the future.
The rest of the characters, Robyn, Delilah, Georgina and Ish all either contribute or make appearances in this installment. As always, Robyn's character is a central one, as Delilah, Georgina and Ish continue to be peripheral characters with the potential for further development.
The plot builds to a crescendo as it all comes together and Thurman ties up all the loose ends to this exciting installment. Deathwish was a well rounded book and the best addition to this series so far. It has everything, the plot is well constructed, the characterization continues to be excellent and to grow, as does the worldbuilding. I hope Thurman continues to use Niko's point of view in future installments, as I think this makes a big difference to the series. I graded the other three books and if I were grading this one, I would give it the highest grade.
You can visit the author here.
Posted by Hilcia at 9:47 AM