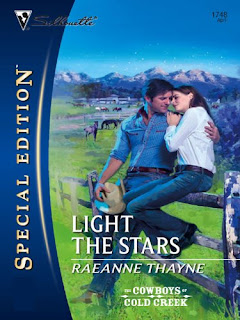 Wade Dalton was having a very bad day.

His five-year-old had accidentally set the kitchen on fire. His daughter was surly, as usual. The baby hadn't been fed yet. And his mother--aka "The Childminder"--had eloped...with a scam artist. Could it get any worse?

I've enjoyed reading RaeAnne Thayne stories these last few of years. In 2009 I read Dancing in the Moonlight, Book 2 of the original Cowboys of Cold Creek trilogy, and soon thereafter I purchased and read most of Thayne's back list. I still have a couple of them in my TBR. Light the Stars, Book 1 of the trilogy, was one of them.

I really like the way the story begins. It kept me reading:


On his thirty-six birthday, Wade Dalton's mother ran away.

She left him a German chocolate cake on the kitchen counter, two new paperback mysteries by a couple of his favorite authors and a short but succinct note in her loopy handwriting.

Happy birthday. I'm sorry I couldn't be there to celebrate with you but by the time you read this we'll be in Reno and I'll be the new Mrs. Quinn Montgomery.....

Wade Dalton owns and runs the Cold Creek Ranch, on top of that he's a widower with three children. His mother eloping with a stranger is a big concern, but having to care for the house and three small children on top of the ranch responsibilities leaves him angry, confused and feeling more than a little helpless. His mother has been taking care of his children for so long that Wade is clueless about them or how to care of them.

In comes Caroline Montgomery, the new groom's daughter. Caroline was Marjorie Dalton's life coach. Unfortunately, Marjorie somehow met Caroline's scheming father and the two eloped together. Hoping to stop the marriage and what she suspects is another grift planned by her father, Caroline rushes from Los Angeles to Cold Creek, but arrives too late to stop the elopement.

Instead she finds a furious and suspicious Wade Dalton as he tries to deal with two little boys and a crazy situation. Feeling guilty over her unwitting role and her father's possible actions, Caroline basically pushes her way into Wade's life and volunteers to take care of the children until Marjorie returns. After much ado, he agrees and pretty soon she's close to the children and tempting Wade out of his celibate status.

The relationship between Wade and Caroline begins with suspicion oozing from Wade and guilt from Caroline. As they share family moments, Caroline realizes that Wade doesn't really know his children and as she makes him aware of these facts their attraction for each other grows. Wade reluctantly admits the attraction, basically because he has only been in love once and that was with his now deceased wife. He uses his suspicions of Caroline to keep a distance between them and goes the distance to the end. On the other hand, initially Caroline is giving with Wade and the children out of guilt for what she sees as her role in her father's possible future criminal plans, and pretty quickly falls in love with both the children and the father.

There's very little warmth to Wade since he spends most of the story coming off as an angry bear, and although there's plenty of warmth to Caroline, she somehow comes off as pushy particularly since their time together is so short. The timeline doesn't help to make this relationship really workable or believable. The connection between these two characters is tenuous and that's probably due to Wade's angry personality and the fact that he suppresses and negates his feelings for most of the story.

I really enjoyed the ranch setting and the wonderful extended family. Wade has two brothers, Jake and Seth, and his children who play an integral role in this story are quite cute, particularly the two little boys. The Daltons had an interesting childhood and that is touched on in this first book of the trilogy. Secondary characters are kept to family members and they play peripheral roles in this story, so the focus stays firmly on the couple and the family.

The stories I've read by Thayne have had some depth to them, and although in this instance I still enjoyed the writing style, Light the Stars is not one of those stories, and in that respect it was disappointing. This is an enjoyable read up to a point, but it turned out to be standard fare with an aggressively suspicious hero, and a heroine that's not only quite forgiving of his crankiness and unfair behavior, but actually seemed to yearn for it once things came to a head between them.

I think it is fortunate that I read the second book of this trilogy first. Regardless, having read Thayne's other works, I still look forward to reading Seth's story, Dalton's Undoing, the 3rd book in this trilogy -- another book that I also have in my "to be read" pile. Maybe this year!

Original Cowboys of Cold Creek Trilogy:
Light the Stars, #1
Dancing in the Moonlight, #2
Dalton's Undoing, #3
Posted by Hilcia at 8:22 AM