Sunday Feature: The Thorn and the Blossom: A Two-Sided Love Story by Theodora Goss 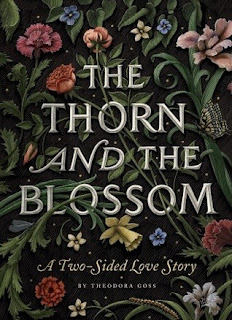 The Thorn and the Blossom is the story of two star-crossed lovers.

Evelyn Morgan is a young American student studying at Oxford when she walks into Thorne & Son, a bookstore in the Cornish village of Clews. Little does she know, but she is about to meet the love of her life. And when Brendan Thorne hands her a medieval poem called The Book of the Green Knight, he doesn't know that it will shape his future forever. After that first meeting, they don't see each other for years -- yet neither ever stops thinking about the other. It's as if they are the haunted lovers in the old book itself.

I was offered The Thorn and the Blossom by Theodora Goss for review and frankly, besides the fact that this is a story about star-crossed lovers with a mystery, the format really caught my attention. This is a two sided story printed in an accordion-fold binding. The story is told from Evelyn's perspective on one side of the book and as you turn it around, you can read the story from Brendan's perspective on the other side. You can see how that works here. The result is quite interesting.

The book itself is gorgeous. It comes in a hard slip case (the cover you see above), and I think it would make a beautiful gift or just a great keeper for your bookshelf. I love it. Reading it was a bit awkward at first because the book doesn't have a spine and it has to be held a certain way, but after a while I found a way and it worked fine, particularly because the book is not heavy.

Although this novella is short (38 pages for Evelyn's story and 39 for Brendan's) I loved the fact that, using this method, by the time the end comes around both characters' motives or motivations are well-known to the reader even though both sides of the story mirror each other. Using that different perspective and developing each character in depth makes a big difference to the reader's experience. I began the book from Brendan's point of view and then went on to Evelyn's, but I do wonder how it would be to begin the story the other way... would the experience be different? Interesting.

The story itself is beautifully written by Theodora Goss. This is a combination of the contemporary and the mythological, as Evelyn and Brendan's story seems to mirror that of Sir Gawan and Elowen which is found in the medieval poem The Book of the Green Knight, simultaneously giving the reader a sense of a concrete present and a magical atmosphere. It's a wonderful combination. Goss packs a lot into this little book, yet I couldn't help but wish the story had been just a little bit longer.

The Thorn and the Blossom by Theodora Goss is a beautiful little book with an interesting format that works quite well with Evelyn and Brendan's sweet and magical love story.

About the Author: Theodora Goss won the World Fantasy Award in 2008 for her short story "The Singing of Mount Abora." She has been a finalist for the Nebula, Crawford, Locus, and Mythopoeic awards and has appeared on the Tiptree Award Honor List. Her writing has been showcased repeatedly in "Year's Best" anthologies. She lives in Boston, where she teaches literature at Boston University.
Posted by Hilcia at 1:14 PM