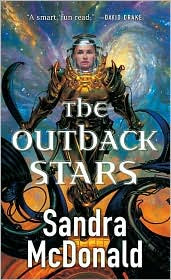 The Outback Stars is the first book in a military science fiction series by Sandra McDonald and her debut novel.

McDonald's world is based on native Australian mythology. Everything from planets, objects, to the alien race have Australian names and are based on tribal Australian culture. I'm not familiar with this mythology or culture and cannot attest as to its authenticity in this book or lack thereof. I can tell you that her world is definitely an interesting one.

Lieutenant Jodenny Scott is our principal character in what turned out to be a large ensemble of characters. Jodenny is still recovering from the traumatic loss of her last ship, the Yangtze -- a disaster being blamed on colonial separatist terrorists. Although physically recovered, and despite her heroic actions during the tragedy, Jodenny still suffers from both the trauma of having seen her loved ones die and survivor's guilt.

Jodenny procures a berth on the Aral Sea where she's placed in charge of Underway Stores or supplies. She finds a dysfunctional ship and a troubled department full of inadequate, unprofessional and inefficient staff. There are problems with thefts, rape accusations, beatings, fights, accidents, gangs, missing inventory and everyone seems to have a secret. Jodenny is expected to straighten it all out. On top of that, she also has to deal with shipboard politics -- intrigue abounds.

This is where I think McDonald excels. She weaves the shipboard politics and the nitty gritty detail about military life on a ship beautifully. She takes her time outlining protocol and other details that would otherwise seem unimportant and makes them part of the plot. The author herself was in the military and this is made obvious by how well these details are incorporated into the book.

However, the whole story doesn't take place on the ship. While on leave at Mary River, Jodenny and Sargeant Terry Myell stumble on a discovery that could change the way everything works in their world. The plot thickens as Jodenny and Terry are catapulted into an intriguing, dangerous and often mystifying situation. In the process, they fall in love creating a career-ending situation for themselves, as their relationship is forbidden by military rules.

I thought The Outback Stars was quite the ambitious undertaking and wasn't too sure about it for a while. McDonald introduces the reader to her worldbuilding quite slowly, but certain aspects of it kept my attention and I got into it. Her world was interesting, it bordered on fantasy and that part was a surprise. Although creative, I wasn't entirely satisfied with McDonald's worldbuilding. Too often I felt as though I were left in the dark for far too long about certain details, and that made for a frustrating read. Also by the end, there were either unanswered questions that should be answered in the next book, or confusing answers -- few conflicts seemed resolved or clear.

What I really enjoyed was McDonald's attention to detail when it came to the military side of the book and the humanity of her characters. She doesn't portray the secondary or central characters as super-heroes. Instead, they display the joys, fears, pride and jealousies you might expect of everyday people. That was a nice touch.

As you can see The Outback Stars was a mixed bag for me. I enjoyed the characters and am thinking of getting the next book in this series, The Stars Down Under, to see where Sandra McDonald takes them. Grade B-

Series:
The Outback Stars
The Stars Down Under
The Stars Blue Yonder

Visit Sandra McDonald here.
Posted by Hilcia at 6:43 AM