The Assignment by Evangeline Anderson seems to be the first M/M Erotica story for a lot of readers out there. Although there are two very short sequels to that story, I'll be Hot for Christmas and Fireworks, now there's a new novella by Ms. Anderson featuring Detectives Valenti and O'Brian, Heart and Soul.  Here's the blurb. Enjoy! 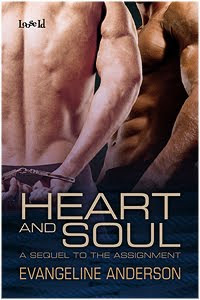 The Boys are Back…

It’s been two years since tall, dark, and stoic Detective Valenti, and his partner, blond, intense O’Brian came to terms with their true feelings for each other. Going undercover at the RamJack, the most notorious gay resort in the country, tested their friendship to the limit and forged a new love between them that has grown immeasurably since.

Valenti begs his partner not to go, but O’Brian is determined to take the assignment—and then fails to check in at the appointed time. Fearing the worst, Valenti goes undercover to rescue his partner, only to find himself caught in Talbert’s sadistic web. Now he and O’Brian will be forced to act out a madman’s darkest desires on film and hope they both survive. The ordeal will test their love and force them to bare themselves to each other in a way they never have before, both Heart and Soul.

Available here.
Posted by Hilcia at 6:37 AM