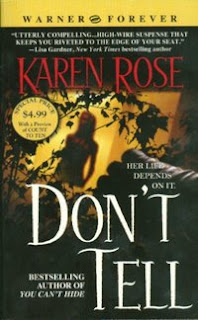 It was a desperate plan. But Mary Grace Winters knew the only way to save herself and her child from her abusive cop husband was to stage their own death. Now all that remains of their former life is at the bottom of a lake. Armed with a new identity in a new town, she and her son have found refuge hundreds of miles away. As Caroline Stewart, she has almost forgotten the nightmare she left behind nine years ago. She is even taking a chance on love with Max Hunter, a man with wounds of his own. But her past is about to collide with the present when her husband uncovers her trail and threatens her hard-won peace. Step by step, he's closing in on her- and everything and everyone she loves.

Don't Tell by Karen Rose was definitely a solid read for me. It was pretty heavy though -- the villain of the piece is a cop and a wife beater. Rose is very descriptive when writing the violent scenes in the book, specifically the scenes where Mary Grace/Caroline is abused. Rose certainly doesn't pull her punches when it comes to describing the damage done by this man to his wife and child. She addresses both the physical and psychological damage done to families by abusive husbands, as well as the "blue wall of silence" that is often found when it comes to cops who beat their wives. She doesn't paint a pretty picture nor does she gloss over the consequences.

I'm not going to beat around the bush, at times this was a tough book to read for me personally. However, I was quite impressed with how well Ms. Rose researched battered wives and the long-term psychological impact abuse has on their lives, as well the lives of children who witness the abuse.

The romance was very well done in this book also. Yes, there is a romance that takes place after all the violence takes place and in the midst of the suspense, and it fits... it really does. As the hero, Ms. Rose chooses Max, a man who needs Caroline as much as she needs him. In each other, they find love, healing and a much-needed family.

Personally, I wish the climax with the villain had been less melodramatic. I was hoping Caroline would find closure in a different way -- that part of the book was a personal disappointment. After a while, I'm afraid the villain-husband-cop became a bit too much of a monster and diminished some of the initial, real impact he had on me. On the other hand, there are some great secondary characters in this book I hope to see in future books.

I'll definitely be reading more by Karen Rose in the future. I've already chosen Have You Seen Her? as my next read. Grade: Solid B

See Nath's review of Don't Tell at Books, Books and more Books. Nath's relentless love for Rose's books made me look at her work twice. Tabitha's (Tabz Book Blog) reviews of other books by Rose finished the job. Thank you both for the recommendations. :)
Posted by Hilcia at 9:53 AM