Valentine's Day & a favorite: The Secret Pearl by Mary Balogh

We love our romance, don't we? It's a year-round give and take for most of us, but for the rest of the world this week in February, love, romance, wine and roses seem to be the words of the day. I have many favorite books and could sit here all day recommending them to you, but today, I thought I would share just one of my favorite historical romance novels.

This is a book that was released over a decade ago in the 1990's, but that I only read a few years back. I gave up reading historical romances during the 90's and am still in the process of catching up. Once I read this book, it became an instant favorite.

The Secret Pearl by Mary Balogh 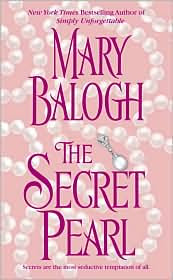 A 1991 release by Mary Balogh, this book has Fleur, a lady turned prostitute by circumstances, as the heroine. Apparently this was controversial at the time. The hero Adam, a Duke, is her one and only client and married, making The Secret Pearl even more controversial.

You are probably thinking, what's so special or even romantic about this couple or this plot? It might have something to do with the way Balogh wrote this book. She begins with two desperate, wounded people and carries the reader away through characterization and writing. And for me, the excellent characterization and beautiful writing allows this book to stand the test of time.

The Secret Pearl has one of my favorite romantic heroes. Adam was gorgeous inside and out. This Duke was willing to move heaven and earth for his heroine. Adam himself was a wounded man, an honorable man and just about irresistible.

Fleur is a Balogh heroine. Definitely. She is a lady who through no fault of her own finds herself in dire circumstances. Her character, however, never comes into question -- even though she falls in love with a married man. A true Balogh heroine, Fleur is all about character love and sacrifice.

There's some beautiful writing in this book and quite a few scenes that I could share. The scene where Adam declares his love for Fleur is romantic, heartbreaking and unforgettable -- after all they share a forbidden love. Instead, I've chosen another scene for you -- a scene I love for its simplicity and impact.


They stared at each other for a long while before she looked down at her hand, which was lying palm-down on the seat between them. No, she would probe no further. She did not want to know the truth. It was too strange, the fate that had brought them together, and too cruel.

She could feel his eyes on her hand too. And he set his own beside it, that beautiful long-fingered hand that had once terrified her and that still disturbed her and made her feel breathless. Their little fingers almost touched.

They sat like that, still and silent, for a long while before he moved his little finger to stroke lightly over hers. And she spread hers and bent it so that their two fingers twined together.

Their eyes watched their hands. They touched at only the one point. They said nothing. Page 323

What comes to your mind today when you think romance? Which book pops up first?
Posted by Hilcia at 12:31 PM