Review: The Unwanted by Jeffrey Ricker 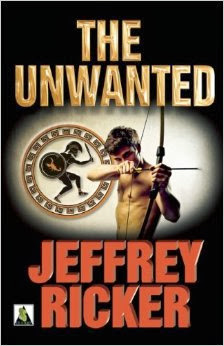 I read The Unwanted by Jeffrey Ricker in two sittings, the pacing and adventure are that good! The story begins in a mythology-based contemporary setting that surprisingly ends in the mythological world with a bang and a surprise.

The three main characters in this book were introduced in the short story "The Trouble with Billy," which first appeared in the Speaking Out: LGBTQ Youth Stand Up anthology. There, we met short, skinny Jamie, the only out gay kid in his high school as he was relentlessly bullied by Billy and defended by best friend Sarah. The Unwanted begins with Billy punching sixteen year-old Jamie on the nose at school, Sarah coming to the rescue, and Jamie going home with a bleeding nose without first asking for permission from school authorities. Poor Jamie is in for a surprise because when he gets there his mother is waiting. The mother that was supposed to be dead.

Jamie's parents have a lot of explaining to do -- one of them is the winged horse hanging out in his backyard! Once everything is explained, Billy and a bleeding nose are the least of Jamie's worries. It turns out that his mother is one of the mythological Amazons. As we know from Greek mythology, Amazons do not keep their male children and Jamie's mother left him to be raised by his father. Now there is big trouble brewing and the Amazons may be wiped out by an angry god. However, they have one chance, the Oracle's prophesy clearly says that a male child will save them. Jamie's mother believes that he may be that boy, and hopes he will go back with her to save her sisters and her home.

This is an adventure full of risks and danger! There is a romance, but there are also fantastic friendships, great magical moments, and dangerous battles filled with deadly villains. I enjoyed all of it. Jamie's personal situation captures the reader, but the slow-building danger and revelations really keep the reader going. I was surprised at how well the pacing works in this novel. It doesn't lag even when there's a lull in the action because there is that expectancy that something is about to happen.

As narrator, Jamie's voice is fantastic. Ricker hits the right young adult tone, so that Jamie comes off angsty, sarcastic, and humorous at the most unexpected of moments even as he deals with very serious situations. He's not a know-at-all or the big muscular hero who can do it all. As a matter of fact, he's small for his age, can't really fight, and doubts his abilities all the time. Young adults can relate to him as a character, including when it comes to his handling of family and friends.

Family issues are definitely on the forefront for Jamie: his father's and his own confused feelings for an absentee mother. Additionally, Billy the bully also becomes a key character in this young adult fantasy/adventure. The development of Billy's character, the issue of trust and the growing relationship with Jamie carries to the end of the story.

I loved The Unwanted. I found it to be both fun and highly relevant with central and secondary characters that young adults can relate to, and will enjoy seeing on the page. Additionally, Ricker takes some overwhelming risks with characters and story at the end that I believe give this read a unique touch. Highly recommended!