. . . On Outlander by Diana Gabaldon 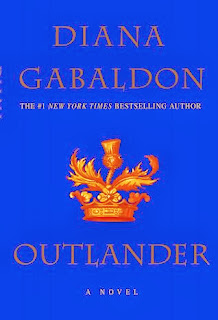 Outlander by Diana Gabaldon. It is now considered a classic by many, particularly by fans of the series. First published in 1991, the book is really a mixture of genres: historical fiction, romance, action/adventure and science fiction/fantasy. Regardless, it won the Romance Writer's of America RITA Award of that year and rightly so. Outlander is all those things, but first and foremost it focuses on the passionate and all-consuming romance that develops between Claire Elizabeth Beauchamp Randall and James Alexander Malcolm MacKenzie Fraser, or Claire and Jamie.

Throughout the past decades, I've read most of the Outlander series, from Dragonfly in Amber (Book#2, 1992) through A Breath of Snow and Ashes (2005), but I never read Outlander. I began with the second book, read forward, and decided to save Outlander for the end so I could reread the whole series at once! Was that ambitious or what? In 2011 when Nath visited me for the first time, she noticed those enormous Gabaldon books on my shelves and asked if I was a fan. That's when I told her my story. Before going back to Canada, she surprised me with an anniversary copy of Outlander! Still, stubborn as I am, I did not read it. With the upcoming release of the mini-series, however, I decided it was time. Sigh . . . I want to watch it!

I absolutely loved Voyager! That book hooked me on the series. I followed the story quite well, with much of the background information given at some point during other books in the series. But, what I didn't know, of course, is that I missed so many of the little details that begin in Outlander and that Gabaldon carries throughout the series -- introduction of characters, small intimacies, moments that are later referred to, but that don't have the same emotional impact unless read first hand. I missed out on the young, virginal Jamie asking all those shy/bold questions of the older, sexually experienced Claire. Those wonderful, intimate moments rendered by Gabaldon as the two get to know each other and fall in love -- the laughter and the pain, the craziness, the quiet evenings and perennial lust, the bickering and fights.

Jamie and Claire's adventures are fantastic. They are not only filled with action, but with historical facts and political intrigue that plagued Scotland in 1745. It not only includes the intricacies of clan politics, in this case the MacKenzie and Fraser clans, but also with secret plans for the Jacobite uprising. Gabaldon's details of day to day life as part of an18th Century Scottish clan with all the restrictions, dangers, ignorance and superstitions, are fascinating. As in the rest of the books in this series, the best aspect of reading this information is that the reader mostly views events through Claire's 20th Century eyes. Although she's from another era, 1945, Claire often echoes the reader's thoughts.

I also missed a lot about Frank Randall, Claire's 20th Century husband. There are obvious reasons why I didn't like Frank in Voyager. In Outlander, however, Frank and Claire seem to be a couple happily trying to grow closer after a long separation that occurred during WW II when Claire served as a combat nurse and Frank, now a professor and historian, as some sort of spook soldier.

Claire accidentally travels back in time to the 18th Century, meets Jamie and basically commits bigamy by marrying him -- admittedly under duress -- and adultery when their marriage is joyfully consummated. However, she spends most of the time confused, attempting to get back to her time and to husband Frank. This even as her feelings for Jamie grow and change.

There are a few points of interest in how Gabaldon deconstructs Frank's character and in the way that Claire and the reader eventually come to perceive the man.

1) Gabaldon begins by making Frank a good, but somewhat distant man whom Claire is obviously fond of but whose personality and personal interests seem to bore her.
2) Gabaldon also plants a small seed of doubt about Frank's fidelity before Claire goes back in time.
3) In 1745, Gabaldon uses Frank's ancestor Jack Randall to slowly vilify Frank by proxy. She achieves this by giving Jack not only Frank's face but his smile and mannerisms.
4) Black Jack Randall is portrayed as an evil, out of control, sadistic English sodomite with no redeeming qualities whatsoever. A revolting man who not only nauseates Claire, but often  confuses/throws her off because of that "Jack/Frank" face, smile, look.
5) By the time Claire makes her final decision to stay and/or return to her own time, who really wants her to go back to a Frank who may or may not be a cheating ass? A Frank who was engendered by an abusive monster like Jack Randall? I know I didn't! Interesting and fascinating developments.

Claire lies and attempts to blend in are sometimes good but often get her and those around her in trouble. She has medical experience as well as some general historical knowledge, but her forward attitude as a 20th Century woman dropped in the middle of the 18th Century is what really singles her out. And lets just say that although Claire is a survivor, she is also a poor liar. To my surprise, I found that I like the older Claire much more than the Claire of Outlander -- there's a lot of measurable growth to this character throughout the series.

Jamie is straight forward and impulsive which also tends to get him and others in all kinds of trouble. He has the heart of a hero, even though he constantly negates this and often says that he's just doing what needs to be done. He's adorably charming, hardheaded, a man of his times whose open mindedness and intelligence make him the perfect candidate for learning.

Case in point, the now famous (or is it infamous?) scene where Jamie spanks Claire with his sword belt after she disobeys his orders and almost ends up raped and/or killed, also placing Jamie and his men in danger. "The beating scene." Knowing Claire's character and Jamie's relationship with Claire from the other books in the series, I remember being surprised the first time I heard about THE scene. Frankly, I expected her to clobber him over the head with a 2x4 or with a full chamber pot -- she fights him, but unfortunately that doesn't happen.


"Well, I'll tell ye, lass, I doubt you've much to say about it. You're my wife, like it or not. Did I want to break your arm, or feed ye naught but bread and water, or lock ye in a closet for days---and don't think ye don't tempt me, either---I could do that, let alone warm your bum for you."

Jamie believes that corporal punishment of his wife is not only acceptable but expected -- a man of his times. However, he learns that this behavior is not acceptable to Claire -- and at that point he becomes a man open to change going against upbringing and culture. This is a disturbing scene, but I believe it is one that accurately portrays how things would have turned out in that situation during that place and time in history. Actually, corporal punishment takes place widely and often in Outlander, not just to "punish" women/wives, but to discipline children, to keep clan members loyal and true, and ultimately as torture.

If Gabaldon portrays those violent times with disturbing frequency and uncomfortable accuracy, she also makes time for detailed intimacy. Gabaldon writes intimate moments like no one else. Moments that are hard to forget. In Outlander I loved the beautiful days and nights that Jamie and Claire spend at Jamie's family estate of Lallybroch with the family. The chapters have wonderful names and give an idea of what goes on: The Laird's Return, Kisses and Drawers, More Honesty, Conversations by the Hearth, Quarter Day, Hard Labor.


"Hearing the rustle of footsteps approaching through the grass, I turned, expecting to see Jenny or Mrs. Crook come to call me to supper. Instead it was Jamie, hair spiked with dampness from his pre dinner ablutions, still in his shirt, knotted together between his legs for working in the fields. He came up behind me and put his arms around me, resting his chin on my shoulder. Together we watched the sun sinking behind the pines, robed in gold and purple glory. The landscape faded quietly around us, but we stayed where we were, wrapped in contentment." Chapter 32 -- Hard Labor

In Outlander I also found the kind of secondary characters you love to hate and others you hate to love. I loved hating Black Jack Randall with a passion! I wanted someone to slowly strip his skin off with a rusty knife! On the other hand, I had a soft spot for Dougal MacKenzie and kept thinking that under other circumstances he would make a fantastic central character. I hated loving him on the pages of Outlander, but for some weird reason I did.

This is a fantastic, highly addictive series! There's the delicious romance, yes, but there's also all that action, adventure, history, fantastic characterization, and Gabaldon's amazing gift for portraying intimacy in the midst of chaos. I read Outlander this past week and immediately picked up my favorite Voyager to reread, finished it, and am already eyeing Drums of Autumn! Ohhh… no! Highly. Addictive.

If you haven't done so, check out the latest information, pictures, and teasers about the upcoming mini-series here.
Posted by Hilcia at 3:11 PM