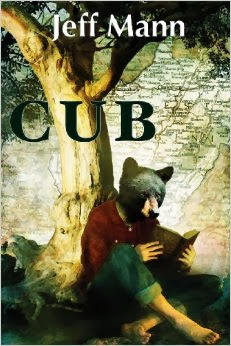 Cub is a special gift from Jeff Mann to all young cubs out there. It is written for young adults who feel like outsiders, including the gay mainstream community. My first thought when I began reading Cub was that Mann dug deep into his own history and experience to create this young adult romance, the central character Travis Ferrell, and Travis's journey of self-discovery.

Travis is a handsome young man from a small conservative town in West Virginia. A bright thinker and budding poet, at seventeen Travis enjoys the quiet life he leads with his grandmother at their farm. Graduation is coming up and that means leaving for University and while Travis looks forward to the freedom this will bring him, he also finds himself wrestling with some deeply confusing sexual fantasies, frustrating desires, and questions about his future.

Travis knows he's gay but he is not like Martin, the one kid who came out in school and was run out of town. Travis is shy, quiet, and self-contained, more so after his best friends graduated and left town. He often feels different, as well as confused and horrified about his sexual desires and recurring fantasies to both control and protect someone of his own, and doesn't understand the intensity of the darkly passionate and tender feelings that turn him on. He is attracted to boys like beautiful mechanic Mike Woodson -- tall, strong, hairy boys who resemble him and enjoy life (and food) the way he does.

Cub is a story of discoveries and firsts -- first love and sexual experiences. Travis and Mike discover that their sexual desires and fantasies are shared, that there are others who feel the same way, and that there is nothing wrong with those desires. Mann handles the boys' introduction to kink, leather, and the Bear community slowly and with an understanding, gentle hand. There are some wonderful scenes where he uses sexual play instead of graphic scenes to illustrate the boys' explorations and sense of wonder. However, it is through conversation that all is explained with a deft hand: their deepest fears, the need to control and protect, to trust and feel safe.

Mann places plenty of realistic obstacles in the boys' way -- hiding their love, fighting school bullies and adults whose conservative views may not allow them to live the life they want, together. For Mike, it is fighting poverty, an abusive father, and an uncertain future. The boys often philosophize about life, they question, look for answers, and come up with their own conclusions. Jeff Mann's young characters have a thirst for knowledge and strong beliefs.

Jeff Mann is so talented that he can write anything and do so successfully. But young adult, you ask? Yes, he can write that too. In this case he does so with the authority of someone who has experience on the subject.  Cub fills an empty space within LGBT young adult reading materials by thoroughly connecting with the outsider, identifying and soothing the fears and opening up a whole new world to young cubs.  Highly recommended.