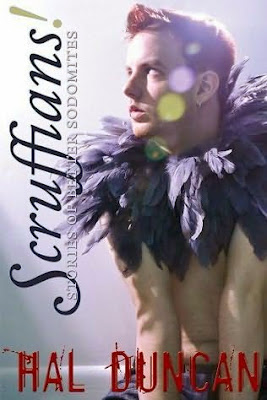 Are you prepared to enter acclaimed author Hal Duncan's world of scruffians and scamps and sodomites? Beware, for it is filled with the gay pirate gods of Love and Death, immortal scoundrels, and young men who find themselves forced to become villains. But who amongst us does not adore a gamin antihero? These fantastical tales from the fringes of an imaginative realm of supernatural fairies and human fey will captivate the reader. Light a smoke, raise a cup of whiskey, and seek a careful spot to cruise the Scruffians!

About the Author: Scottish author Hal Duncan's debut novel, Vellum, garnered nominations for the Crawford, Locus, BFS and World Fantasy awards, and won the Gaylactic Spectrum, Kurd Lasswitz and Tähtivaeltaja awards. He's since published the sequel, Ink, the novella Escape from Hell!, various short stories, a poetry collection, Songs for the Devil and Death, and two chapbooks, The A-Z of the Fantastic City from Small Beer Press and the self-published Errata.