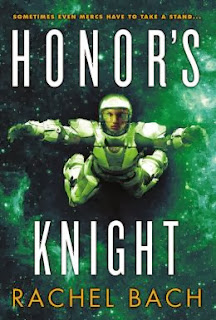 Honor's Knight by Rachel Bach was an even better read for me than Fortune's Pawn, and I enjoyed that book. I wasn't expecting that, because second books are usually known as the meaty but tame ones in a trilogy and often leave you hanging -- but not this one.

Honor's Knight begins exactly where Fortune's Pawn ended, with Devi digging a grave for her security partner Cotter and still suffering from the mind-wipe that was performed on her, not remembering any of the events that caused his death, left her mortally injured, and the Glorious Fool so damaged they need two days of repairs before taking off. Devi has also developed an aversion for the cook whose name she can't seem to remember and whose face she can't stand to look at without feeling revulsion and bouts of nausea.

The mind-wipe left holes in her memory that slowly begin to bug her, but it also leads her to cling to Captain Caldswell and act like a good little soldier who follows directions to a "t." And although reluctant, she even considers telling him about the glowing bugs she sees floating around the ship and the blackness that spreads over her fingers and sometimes her whole hands like ink. This state of affairs goes on for a while, with Caldswell hiring another experienced merc to help Devi with security. During this time Rupert and Devi share moments filled with angst and tenderness. They both suffer because she can't even stand to look at him or for him to look at her. She doesn't understand the aversion and constant awareness she feels around the man, or the fact she sometimes wants to hug him. It's really sweet and I felt for Rupert . . .

All that changes when the ship is attacked and it becomes clear that an attempt was made to kidnap Devi. Why? The mind-wipe is reversed and once she remembers everything we get our gloriously brave, impulsive Devi back -- and she is furious! Thank goodness because I couldn't stand that tame rather lost girl. And . . . let's just say that a furious, fully armored, and armed Devi is not a good thing for those involved, particularly after she reveals what really happened to her before she was injured. At this point, Caldswell's decisions and Rupert's actions force Devi to get away from the Glorious Fool. When she finally discovers the whole truth, she realizes that her life will never be the same and sadly, her dreams may be lost forever.

It is undeniable that Devi is the center of the overall story and she is a fantastic central character who keeps the reader's attention. That continues in Honor's Knight as her adventures expand away from Glorious Fool into unknown territory, allowing Rachel Bach to introduce new characters, expand her world and slowly reveal political undercurrents, hidden agendas and the terrible monsters (nature's monsters and those created by men) hiding "under the bed." The monsters that Devi may have to deal with since she has become the "savior of the universe" to some, and "a weapon" to others. A lot happens in this book, with the xith'cal, lelgis, Terrans, Paradoxians, the mysterious phantoms, the secret Eye organization and the "daughters" getting involved.

Honor's Knight is all about world-building through revelations, as Devi and the reader discover everything together. Many of those details that were painted with broad strokes in Fortune's Pawn are detailed in Honor's Knight, and most of the questions are answered satisfactorily. The fun adventure, the great dialog, excellent action and pacing, the romance, and those relationships with questionable characters that come in all different shades of gray that I so enjoyed in the first book, are still very much part of this book, with the addition of a couple of provocative threads addressing moral choices. And, if you like exciting, action-packed endings with an emotional impact, well, Honor's Knight has that too.

With so many revelations in Honor's Knight, now I can't wait to find out how everything is resolved in Heaven's Queen (Paradox #3). With Devi in the middle of everything, things will not be easy, and I'm absolutely rooting for Rupert and Devi. I'm just glad that I won't have to wait too long to find the final answers!