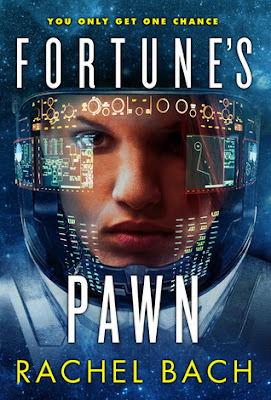 Deviana Morris is an armored combat mercenary obsessed with becoming the best in her home planet Paradox. To her, that means becoming part of the elite Devastator unit guarding the Sainted Paradoxian king. To achieve her goal, Devi takes a short cut by signing a one year contract as security in The Glorious Fool, a beat-up space ship rumored to be cursed where security officers rarely finish contracts because they die on the job.

Devi quickly finds out that this is true as the ship is attacked by either pirates or aliens almost everywhere they go. But what really intrigues her is the secrecy surrounding the ship's crew, particularly Captain Caldwell, his daughter Ren, and Rupert, the drool-worthy cook. Who are they, really? Devi's goes on a solo fact-finding mission to find out, but as she fights aliens, including the dangerous and dreaded xith'cal, ends up injured several times and later bitten, she begins to find some astonishing answers that place her bright future in jeopardy and her life in mortal danger from unexpected enemies.

Fortune's Pawn, by Rachel Bach is the first installment in her Paradox military science fiction series. I'm not going to lie, I had a few problems with a few "science" details that did not make sense to me throughout this story. Yet, I couldn't help but devour the book in one sitting, and my issues with those details didn't stop me from running to preorder the second book, Honor's Knight. Why is that?

Well, Fortune's Pawn is a fun space adventure. Fun with a capital "F." The pacing is fantastic with excellent action that's almost non-stop, it has an ongoing romance that I'm enjoying, there are great aliens with a few gruesome scenes to spice things up, and the overall mystery is so good that by the end my curiosity to find out what was really going on was killing me!

The other reason is the cast of crazy characters, in particular Deviana Morris. Devi is one of those strong, cocky, heroines with lots of swagger fueled by self-confidence and ambition, who displays her sensuality openly. Mind you, she's not a great detective, Devi's too obsessed with blood-lust, her expensive armor which she named Lady Gray, guns Sasha and Mia, and blade Phoebe, to really concentrate on the details. Somehow, though, she keeps it together long enough to find the facts. Devi is also a cold, fearless warrior, but she's not heartless. Actually, Devi is a piece of work! I loved her!

Rachel Bach's world is full of mystery. Earth has collapsed, but before that happened, humans colonized quite a few planets, and we know that at some point Terrans were at war with Paradox and their colonized planets. Also inhabiting this world are the feared and detested xith'cal, a lizard-like alien species, and the mysterious lelgis, beautiful transparent squid-like creatures made up mostly of a substance called plasmex.

Whatever Captain Caldswell, Ren, and Rupert are doing is dangerous work involving these different species and governments. That much we know. But, what are they doing? And why? Who are the mysterious humanoid alien-like beings that keep attacking the Fool, and are stronger than even Devi's armor. And, what are those little transparent bugs Devi keeps seeing all over the ship? There are many questions, some answered and others left to be answered in future installments.

This is not heavy military science-fiction filled with strategy as its central theme. This is a light, fun, space-opera (or space romp) with an excellent central character. Additionally, there's an intriguing and subtle political undercurrent to it, and the excellent mystery and great action adventure takes center stage. In Fortune's Pawn, there are a few revelations that wet the reader's appetite about the mystery and there is a satisfying conclusion. But, my goodness, it also leaves the reader gasping and wanting more. This series promises to be pure, unadulterated fun, (hey, it has a romance!) and I'm not going to miss it! I know it is just going to get better. :)