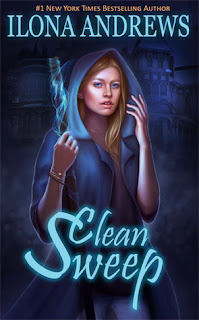 On the outside, Dina Demille is the epitome of normal. She runs a quaint Victorian Bed and Breakfast in a small Texas town, owns a Shih Tzu named Beast, and is a perfect neighbor, whose biggest problem should be what to serve her guests for breakfast. But Dina is...different: Her broom is a deadly weapon; her Inn is magic and thinks for itself. Meant to be a lodging for otherworldly visitors, the only permanent guest is a retired Galactic aristocrat who can’t leave the grounds because she’s responsible for the deaths of millions and someone might shoot her on sight. Under the circumstances, "normal" is a bit of a stretch for Dina.

And now, something with wicked claws and deepwater teeth has begun to hunt at night....Feeling responsible for her neighbors, Dina decides to get involved. Before long, she has to juggle dealing with the annoyingly attractive, ex-military, new neighbor, Sean Evans—an alpha-strain werewolf—and the equally arresting cosmic vampire soldier, Arland, while trying to keep her inn and its guests safe. But the enemy she’s facing is unlike anything she’s ever encountered before. It’s smart, vicious, and lethal, and putting herself between this creature and her neighbors might just cost her everything.

Clean Sweep is a great combination of urban fantasy and science fiction. I love the world-building with a magic Inn, a powerful Innkeeper, a fresh look at shifter werewolves and vampires, and some pretty strange rules. The action is almost non-stop with Dina as the fabulous central character, werewolf Sean Evans playing the perfect romantic interest, and cosmic vampire soldier Arland coming in to give him some competition in the last third of the book.

I loved the ongoing humorous dialog and hilarious moments that happen between Dina and Sean, and the way the two learn how to work with each other. There is some great chemistry there between them that I hope will be further explored in future installments. But they are all fighting a dangerous monster on the loose, and there is enough action and gruesome scenes to satisfy urban fantasy fans. My favorite scenes, however, have to be when the Inn uses its magic through Dina and when her Shih Tzu dog, Beast, shows his true nature. Clean Sweep is a different, fresh read from the Ilona Andrews writing team. I know this story was developed at their website and the next installment is on the works, but I won't read it until it is done. I hope they hurry because I can't wait! Grade: B+ 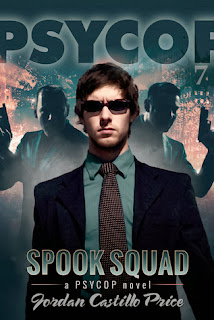 Everyone enjoys peace and tranquility, and Victor Bayne is no exception. He goes to great lengths to maintain a harmonious home with his partner, Jacob. Although the cannery is huge, it’s grown difficult to avoid the elephant in the room…the elephant with the letters FPMP scrawled on its hide.

Once Jacob surrendered his PsyCop badge, he infiltrated the Federal Psychic Monitoring Program. In his typical restrained fashion, he hasn’t been sharing much about what he actually does behind its vigilantly guarded doors. And true to form, Vic hasn’t asked. In fact, he would prefer not to think about the FPMP at all, since he’s owed Director Dreyfuss an exorcism since their private flight to PsyTrain.

While Vic has successfully avoided FPMP entanglement for several months, now his debt has finally come due.

A transitional book in this excellent urban fantasy series, Spook Squad is about changes, closing old threads from previous installments and opening new ones to be addressed in the future. The story is absorbing enough, but there are too many pieces of the puzzle left dangling to make this more than a bridge read. Additionally, favorite recurring characters disappointingly act a bit out of character. Vic, Jake, Crash, and their little crew of close friends spend little time together, so missing and sorely missed are those tight emotional ties between favorite characters. Still, this is a favorite urban fantasy series and I look forward to the next installment. Grade: C+

BEHIND THE CURTAIN by Amy Lane
(Dreamspinner Press, January 6, 2014) 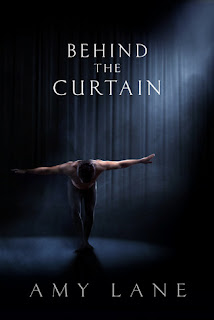 Dawson Barnes recognizes his world is very small and very charmed. Running his community college theater like a petty god, he and his best friend, Benji know they'll succeed as stage techs after graduation. His father adores him, Benji would die for him, and Dawson never doubted the safety net of his family, even when life hit him below the belt.

But nothing prepared him for falling on Jared Emory's head.

Aloof dance superstar Jared is a sweet, vulnerable man and Dawson's life suits him like a fitted ballet slipper. They forge a long-distance romance from their love of the theater and the magic of Denny's. At first it's perfect: Dawson gets periodic visits and nookie from a gorgeous man who “gets” him—and Jared gets respite from the ultra-competitive world of dancing that almost consumed him.

That is until Jared shows up sick and desperate and Dawson finally sees the distance between them concealed painful things Jared kept inside. If he doesn’t grow up—and fast—his "superstar" might not survive his own weaknesses. That would be a shame, because the real, fragile Jared that Dawson sees behind the curtain is the person he can see spending his life with.

I'm a bit perplexed. I don't know what happened because from the beginning I loved the premise for Behind the Curtain, the characters -- Dawson, Jared, and Dawson's best friend Benji -- and how the story was evolving,. Unfortunately about half-way through this book I became tired of Dawson, Benji and the rest of their friends as they went about the daily grind, or whatever, which seemed to be explained in minute detail. I began skimming this book (something I rarely do), and finished it only because I skimmed. This is not a good thing. To me that's a sign that I'm either bored or just not interested. Anyway, by the time I reached the meaty part involving Jared, all the emotional punch was gone. It's a good story that grabbed my attention and engaged me in the beginning, it just did not keep me there. Grade: C-

PERSONAL NOTE: This past week I almost lost my husband to a pulmonary embolism and other complications. He is still hospitalized, but out of danger and under observation. He's the type of man who makes lemonade out of lemons and his fantastic outlook and incredible disposition got him, and me, through it all. Second chances. Sometimes we get them and we must make the best, tastiest, lemonade ever!! I'm finally home getting ready to do just that thanks to a fantastic team of surgeons and nurses who worked tirelessly day and night to give us that opportunity.

John wants me to read or do something to begin the process of getting things back to "normal." There you have it hon, I posted something. . . :)