Review: The Proposition by Judith Ivory 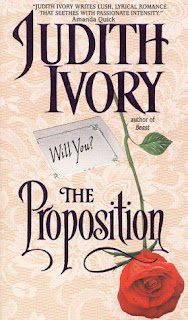 No man, gentleman or otherwise, has ever looked at Lady Edwina Bollash the way the brash, handsome man standing before her is doing now. Edwina has accepted the challenge to transform incorrigible Mick Tremore into a gentleman in just six weeks. And although the linguist is sure she can rise to the task, she isn't at all certain she won't swoon under his frankly sensuous gaze before her job is done.

Mick has lived outside of London society long enough to know that appearances can be deceiving. Edwina might look all buttoned up—the perfect English lady—but there is unleashed passion existing just below her placid facade (not to mention a great pair of legs!). And as she prepares him to take his place in society, Mick prepares Edwina to take her place in his heart...and in his bed.

Published in 1999 by Avon, The Proposition by Judith Ivory is one historical romance, that in my opinion no matter the current trend in romance preferences, stands the test of time and will always find new fans.

Why is that? Well, she came up with two unusual protagonists, particularly our hero. First we have Mick Tremore, a rat catcher. He's handsome, fun, funny, brash, raunchy, uneducated (but highly intelligent), and not unhappy about his situation. Instead he's quite proud of himself and of what he has accomplished throughout his life. Although obviously poor, Mick's rat catching business is successful and has allowed him to take care of what's important to him -- he is good at his job. Mick is a lovely man. Of course you know I fell in love with Mick, his personality, and the outward symbol of his virility -- his beautiful mustache.

Then we have Lady Edwina Bollash. Like Mick, Edwina is also highly intelligent, except that she is a lady whose means have been reduced by circumstances and being considered plain in appearance by society has little to no chance of finding a husband. She certainly thinks of herself as unattractive. Now she's the tough to nut to crack, and the character with the contradictory personality in this story. I say contradictory because Edwina is an independent woman who makes a living as a linguist and outwardly seems knowing and confident, but as we slowly find out turns out to be insecure about her looks and a product of the times and her environment. Mick describes her as a "good girl who always wants to do the right thing to please others." That's exactly who Edwina turns out to be when we first meet her and before Mick works his magic on her. And magic he is.

Our story begins in a dressmaker's parlor with a mouse, a rat catcher and a pair of long beautiful legs peaking from under a dressing room. Our rat catcher is crude, dirty, but very handsome under all that grime. The ladies, from the maids to the posh ladies at the dressmakers, are taken by Mick's charm and handsome looks, and unfortunately (or fortunately) for him, his day quickly takes a turn when the maid's family catch her in the midst of seduction. A melee ensues and our heroine Edwina ends up saving Mick by translating the barely understandable language he uses to communicate, a mixture of Cornish and something else entirely.

Judith Ivory uses Pygmalion as the central basis for romance in The Proposition. Basically Edwina and Mick accept the proposition as set by two gentlemen who bet that Edwina can or can't transform the crude and rough Mick into a gentleman in six week's time by changing the way he speaks and behaves. The big test comes at the end of those six weeks when he's supposed to attend a ball to fool society. What happens during those six weeks is a beautiful thing. When I finished reading the story I wondered who exactly transformed whom in this romance. Mick's passion for life and seductive personality have as much of an influence on plain, naive, snobbish Edwina, as Edwina's vocal exercises have on Mick. It's a mutual transformation.

Why not an A then? Well there's the ending and a fairy tale aspect introduced into the story that well... I don't want to spoil for those who have not read this book yet. But, although this segment of the story made it all work out beautifully for Edwina and Mick and gave them both a wonderful happy ever after, in a way it was kind of a let down for me. I was hoping for that section of it to be just as different as the rest of the story and characters, and it turned out to be predictable. Regardless, I enjoyed Mick and Edwina's journey so much that by the end I was quite happy with their story. Tra la la...

Favorite scenes: The opening scene. The plant song scenes. The leg scene in the library. All the scenes where Mick's mustache is featured! Edwina's dancing scene. :)

The Proposition by Judith Ivory. Why did I wait so long to read it? It's a wonderful romance with memorable characters and moments, beautiful writing and for me it's a definite keeper.

Visit Judith Ivory here.
Posted by Hilcia at 11:10 AM