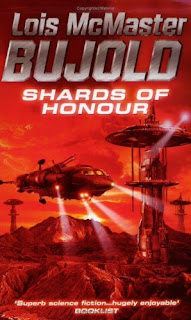 Cordelia Naismith is enjoying a baptism of fire. Her first mission is to captain a throwaway warship of the Betan Expeditionary Force on a mission to destroy an entire enemy armada. Discovering deception within deception, treachery within treachery, she is forced into an uneasy peace with her nemesis: Lord Aral Vorkosigan. Discovering that astrocartography is not the soundest training for a military leader, Cordelia rapidly finds herself the prisoner of the Barrayaran Captain Aral Vorkosigan, also known as 'The Butcher of Komarr'. But the notorious captain is not quite the beast Cordelia was expecting and a grudging respect develops between the two of them. As captor and prisoner on an abandoned outpost planet, the honourable captain and the resolute scientist must rely on each others' trust to survive a trek across dangerous terrain, thus sparking a relationship that shares the struggles of culture and politics between their worlds.

I finally began reading the Vorkosigan science fiction saga by Lois McMaster Bujold. Although I understand that Miles, their son, is the main character throughout the rest of the series, I decided to begin at the beginning by reading Cordelia Naismith and Aral Vorkosigan's story. I figured the backstory would help me understand Miles' character better later on. I think it was a good move.

As the first full-length novel in the series Shards of Honour is key. It serves two purposes: one is to give the readers of this series Miles' family history from both sides, and the other is to introduce the complex political, military and cultural differences between the Barrayaran and the worlds they war against, the Betan included.

Bujold uses the slow developing and low-key romance between Cordelia and Aral to build her world through exchanges of information and conversations between the two main characters. They first meet as enemies, but slowly the need to fight for survival in an alien planet brings them together and Cordelia and Aral form a bond of trust through honor and finally affection.

Honor and valor are also key to this story. It is what drives Aral and what he finds in Cordelia -- that, plus strength and will. Cordelia is not only Aral's ideal of a warrior's wife, but everything he himself would like to be as a warrior. Yet, she is not a warrior but a scientist. Aral is a man of honor through and through, but he is also a military strategist and in his heart, a politician. As such, he must make tough decisions that bruise his sense of self. Cordelia understands him and soothes his soul.

Barrayar's politics are quite complex in this story, and what begins as an attack on Cordelia's scientific party in an alien planet balloons into a disproportionate situation that places more than just a few people in danger. There are betrayals behind betrayals, secrets, and massive amounts of people die or are tortured, planets go to war and in the end Bujold leaves the reader with gray areas as to where responsibilities really lie for the loses and slaughter, and even Cordelia must make a tough choice between her own world and Aral's.

Shards of Honour is most definitely a science fiction novel though. Bujold incorporates the necessary details seamlessly into her worldbuilding. Beginning with the alien planet where Cordelia and Aral meet, and where they both use whatever futuristic science there is to survive, and ending with the space ships and developing edgy science used to win and lose wars.

However, I walked away from Shards of Honour thinking mostly about characterization and complex plotting. The romance that Bujold developed between two mature adults that grows from admiration to an almost quiet, deep love was rather enjoyable, and the complex political circumstances and militaristic Barrayaran culture fascinating. So I'm on my way and can't wait to continue by reading the second book in the series, Barrayar.

Read as part of The 2012 Science Fiction Experience.