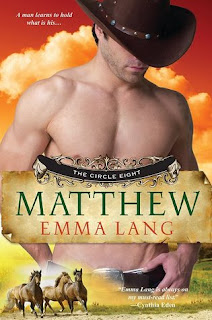 A man learns to hold what is his

It is a vast spread in the eastern wilds of the newly independent Republic of Texas, the ranch their parents fought for … and died for. To the eight Graham siblings, no matter how much hard work or hard love it takes, life is unthinkable without family…

In the wake of his parents’ murder, Matthew Graham must take the reins at the Circle Eight. He also needs to find a wife in just thirty days, or risk losing it all. Plain but practical, Hannah Foley seems the perfect bride for him . . . until after the wedding night.

Their marriage may make all the sense in the world, but neither one anticipates the jealousies that will result, the treacherous danger they’re walking into, or the wildfire of attraction that will sweep over them, changing their lives forever.

Matthew is the first book in The Circle Eight, a western historical romance series by Emma Lang. I love westerns, so how could I not read this book, plus I've never read anything by this author before and just had to try it.

Matthew Graham is the eldest of eight siblings. He's only twenty five years old when his parents are brutally murdered at their ranch and his youngest brother, 5 year old Benjamin, disappears. His six siblings range the ornery teenage Olivia,  to the sweet seven year old Catherine, and he's responsible for every single one of them as well as the ranch that his parents worked so hard to build up and maintain. The Circle Eight ranch is his family's future and with the help of his argumentative, frustrating and determined siblings he will do anything not to lose it.

Before his father was murdered, he applied for a land grant to enlarge his ranch but had yet to claim it. Matthew goes to claim the land, but once at the office he's told that his wife also has to sign the papers otherwise the grant becomes null and void. Matthew lies and says his wife.... Hannah... is back home. He is given a 30 day extension to bring his wife back to sign the papers. Backed against the wall, he has to find a wife named Hannah fast or lose his family's future.

Hannah lives with her granny at the local boarding house. She's considered a plain-looking spinster, kind of invisible, with a bit too much at the top and too much at the bottom to be considered attractive, at least that's the way she describes herself. She dreams of a family and a man who will love her, but knows that this is probably not part of her future, until she meets Matt over turnips at the grocer's and hope kindles in her heart.

What do I like about this book? I enjoyed quite a bit actually. The story as a whole and the premise for the series. As a western historical romance this story covers all the bases.There is the romance that remains the focal point with memorable secondary characters that contribute a great deal to the plot. There's are also a couple of outside conflicts: one with a villain that is solved by the end of the book, the other concerning the ranch and the land also resolved, and another conflict that stays unsolved and that will be recurring throughout the series.

The main characters in this romance are both likable, particularly the female protagonist and that's also a positive for me. I specifically liked that the heroine, Hannah discovers her inner strength and shows marked growth from beginning to end. She begins as a shy woman who seems to be afraid to show her true self to others, and grows into a woman who is not afraid to fight for herself or for those she loves. She gives of herself to others, but also knows that she deserves to be loved and respected. Now, the fact that she has her granny there to give her a push in the right direction when she wavers is a great addition to this story too. Heather's grandmother's input and advise is invaluable to her personal growth.

Matthew well... I love that although he married Hannah to claim the land and because she happened to have the right name, he was really attracted to her from the beginning and let her know. He couldn't keep his hands off Hannah even when he tried. I love how he gets lost whenever he kisses her, and frankly I think that Lang truly conveys the enthusiasm in a sexual relationship between a 25 and a 23 year old free to indulge in daily sexual bouts for the first time quite well! Lots of passion there.

The relationship between the siblings is quite important in this story. It was very well done. They all tease, argue, frustrate, and love each other just as siblings do. Healthy ones, anyway. The underlying understanding they have for each other even as they argue and complain, particularly with the eldest sister Olivia who's hostile to everyone, including herself, and winds up blaming everything on Hannah, is quite believable.

Did I have niggles and problems with the book? Well, yes. There's repetitiveness found throughout the story, particularly during the times when the main characters' inner dialogue or thoughts come into play. For example: Matthew's and Hannah's internal musings and/or reasoning as to why they can't allow themselves to love each other, particularly Matthew's. And when it comes to plot points that I thought were slightly off, I found the siblings' reactions to losing their baby brother Benjamin, including Matthew's, a bit unnatural in its lack of urgency, particularly because they are such a close-knit family.

Overall, however, Matthew by Emma Lang is a quick, enjoyable and solid western historical romance with a passionate and likable couple and memorable secondary characters. I am quite curious to find out how this series will turn out and look forward to the next book.

Visit Emma Lang here.
Posted by Hilcia at 10:43 AM