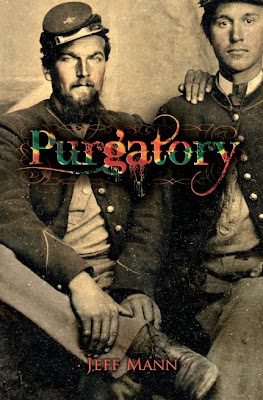 During the Civil War, two young soldiers on opposite sides find themselves drawn together. One is a war-weary but scholarly Southerner who has seen too much bloodshed, especially the tortures inflicted upon the enemy by his vicious commanding officer, his uncle. The other is a Herculean Yankee captured by the rag-tag Confederate band and forced to become a martyr for all the sins of General Sheridan's fires. When these two find themselves admiring more than one another's spirit and demeanor, when passions erupt between captor and captive, will this new romance survive the arduous trek to Purgatory Mountain?

Purgatory: A Novel of the Civil War by Jeff Mann

I know... I just posted a review and it has been a looong time since I highlighted one book or a cover in this blog, but I couldn't help myself after receiving a newsletter announcing that this book is releasing in March. I've been keeping an eye out for it ever since I first saw the cover highlighted at Lethe's website.

There's something about this cover that just does SOMETHING for me. Maybe it's the eyes, the beard or the gorgeous eyebrows on that soldier (that face!), or maybe it's the composition of the picture, but I love, love this cover. It makes me want to hold the book in my hands.

Of course there's the most important part of it, the content! This book is by Jeff Mann. Just read the blurb. If anyone can do justice to a Civil War fiction yarn and make passions erupt convincingly between a Confederate and a Yankee soldier, it's Jeff Mann. Cant't wait!