Review: The Master of Seacliff by Max Pierce 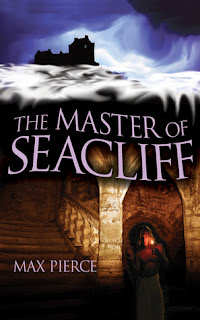 A gothic mystery with a decidedly masculine point of view.

The year is 1899, and Andrew Wyndham is twenty years old—no longer a boy, but not yet the man he longs to become. Brought up by a harsh and stingy aunt and uncle in New York City after the death of his parents, young Andrew dreams of life as an artist in Paris. He has talent enough but lacks the resources to bring his dream to fruition. When a friend arranges for him to work as tutor to the son of a wealthy patron of the arts, Andrew sees a chance to make his dream come true and boards a train heading up the Atlantic coast. His destination is the estate called Seacliff, where he'll tutor his new charge and save his pay to make the life he dreams of possible. But danger lurks everywhere and nothing is quite as easy as it seems.

The Master of Seacliff by Max Pierce is an American gay gothic historical mystery with a romance. We've all read gothic historicals before, right? Pierce reeled me with great atmosphere, a multi-layered mystery and some excellent characters.

Let's begin with the setting. Our main character Andrew travels from New York City to an unnamed place up the Atlantic Coast to Seacliff, a doom and gloom estate that just reeks with atmosphere and a personality all of its own. As soon as the place is described you just know the place is either full of ghosts or something awful is going to happen.

Then there are the characters. There's the young and naive young hero, the handsome and brooding master of the household, and what I thought was a rather large cast of characters for a gothic. Pierce works them all into the mystery, and either uses them as red herrings to throw off the reader or incorporates them into the story to give it depth. The characterization is excellent and I came away from the book thinking of all these characters as having quite distinct personalities. Well done!

There's Duncan, the unhappy, unconventional master rumored to have killed his father to gain access to the business, and young Timothy, born out of wedlock, is a terror with no manners. Then there are brother and sister Leo and Elena from the neighboring estate who initially seem to be a breath of fresh air, but are they really Duncan's friends or is there something else going on? And then there's the staff who range from the downright creepy to those with tragic histories and/or secrets.

The story is definitely traditional gothic historical mystery. Our young and very naive hero is talented but poor Andrew Wyndham. He dreams of going to Paris to paint but lacks funds, so he secures a temporary three-month position at Seacliff as tutor to Timothy, son to the Duncan Stewart, Master of Seacliff. Seacliff and its inhabitants, however, are about to make those three months tough for young Andrew.

Secrets abound at Seacliff, and as Andrew begins to unravel them danger lurks everywhere, and to top it all off sensual undercurrents and confusing feelings place him in an awkward position. Who is the murderer? Who can he trust? As the bodies begin to pile up, Andrew can't decide and he needs to find out fast or he might be the next victim. Pierce leads the reader all over the place with this story, it's great! I can tell you that I guessed and changed my mind numerous times along the way and was never certain who did it until the very end.

Although the mystery in The Master of Seacliff definitely takes precedence over the romance and you won't find explicit sexual scenes, there is plenty of sexual tension between our central characters -- especially when our yet-to-become sexually aware Andrew becomes a bone of contention between brooding Duncan and sexy Leo. The romance between our two protagonists is developed slowly throughout the story and woven quite well with the mystery. I particularly like that when it comes to the romance Pierce went along with tradition and Andrew, although young, is not easy and in the end holds out for true love.

It has been a while since I read a gothic historical mystery, and frankly I enjoyed The Master of Seacliff. The American setting and the great atmosphere were both a plus for me as was the excellent characterization. And even though in some levels I found this to be a standard gothic historical, the male perspective gave this story a fresh feel, and the multi-layered mystery with its great twists was a joy to read as was the happy ending to the romance.