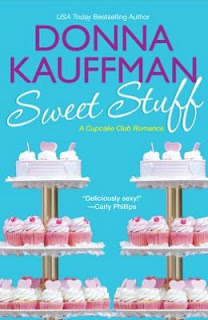 Riley Brown never imagined she would find her bliss on Georgia's quiet Sugarberry Island after years of Chicago's city life. With a new career and fantastic new friends, she's got it all - except for eligible men. But a gig staging a renovated beach house delivers a delicious treat - six feet of blue-eyed, gorgeous writer as delectable and Southern as pecan pie. Quinn Brannigan has come to Sugarberry to finish his latest novel in peace, and suddenly Riley has a taste for the bad boy author that no amount of mocha latte buttercream or lemon mousse will satisfy...

Riley's friends are rooting for her to give in to her cravings and spice up her life, but it's Quinn who needs to learn that life's menu just might include love, in all its decadent, irresistible flavours...

Okay now, doesn't everything about this book look and sound over-the-top sweet? The title: Sweet Stuff. Cover: Baby blue background, featuring light pink and frothy white cupcakes. The setting: Sugarberry Island, Georgia. Well, let me assure you that although Donna Kauffman uses sugar and cupcake baking to set up this series, the story itself is not so sweet that it will give you a toothache. Although you might gain a couple of pounds just by reading the cupcake recipes printed at the back of the book! Yum!


"Later she would blame the whole thing on the cupcakes."

The story begins and ends with the cupcakes, after all this is the second book in the Cupcake Club Romance series. Riley Brown stages homes for a living and as the story opens she is working on a cottage for the local Sugarberry realtor, "Scary Ruth," when she spies a treadmill and decides to give it a try. Mistake! Riley is very clumsy, so it's not surprising when it all goes wrong. It's her fault for getting on the darn machine, but somehow blames it all on the cupcakes of course. Just as she thinks she's going to be found dead from a heart attack on a runaway treadmill, gorgeous writer Quinn Brannigan makes an entrance and her little escapade ends up in a hilarious disaster.

Quinn Brannigan writes thrillers with a touch of romance (yes, he does!). Years ago Quinn's grandparents were residents of Sugarberry Island, and he spent many a summer with them. After many years away, he has returned to the island for quiet time to finish his book and make a decision about his career. On his first day there, he meets the clumsy, voluptuous Riley Brown and proceeds to lose his concentration. I love that scene when they first meet, her clumsiness followed by his helpless attraction to her and how it all ends with such sexual tension between Riley and Quinn.

Unfortunately, all that heat is somewhat diffused for a while as these two work out their issues. Riley has trust issues after having been dumped by a long-term fiance two years before and still hasn't gotten over it, and Quinn seems to be waiting for a relationship like the one his grandparents had and so far hasn't found it. Riley is hot, but Quinn is at Sugarberry to concentrate on his work and doesn't need the distraction. Hmm... that doesn't really work for him for long.

While these two are working out their issues separately, Riley's crew of friends either blatantly interfere by approaching Quinn, or encourage Riley to proceed with a relationship. Kauffman works this relationship well by having the couple meet a few times while they're working on their attraction and building up the tension, but each time they meet it's all sizzle and burn between the two.

Quinn and Riley don't jump each other right off the bat, as a matter of fact they don't even kiss for quite a while even though they're panting to do so. They don't dance around their attraction either, instead they talk about it and make decisions about weather it's a good thing to take their attraction to another level or not. During this section of the story the characters carried out long conversations as intimate scenes were about to happen, at other times inner dialogues interrupted the flow of those same scenes. I couldn't help but find this a bit distracting and it slowed the read down a bit for me. However, Kauffman develops the relationship, and once these two decide to go for it, it's fireworks. Quinn turns out to be not only hot, but a sweet, wonderful man. Riley on the other hand works on her troubling issues and personal insecurities all the way to the end.

The story is set in the South and the food is one of the aspects of the story that gives it that southern flavor, otherwise the atmosphere is that of a seaside town. Maybe that has something to do with the fact that Riley's temporary home is a boat in an island. Riley has an adorable, if huge, dog called Brutus that has his own personality and plays a great role.

There are some interesting secondary characters and some memorable ones, I liked all of them. I didn't read the first book of the series, Sugar Rush, but I don't feel as if I missed much by not doing so. This story is pretty much self contained, although those characters make appearances as secondary characters in Sweet Stuff and contribute to this romance. Lani, the owner of the Lani's Cakes by the Cup bakery where everyone meets for their weekly baking club and the crew are all part of the story. I particularly loved Ms. Alva, an older lady who turns out to be an interfering, matchmaking hoot.

Overall, Sweet Stuff is an enjoyable, solid contemporary romance with a likable couple, sprinkled with some humor, great friends as secondary characters, more conflict than expected and yes... some sweetness too.