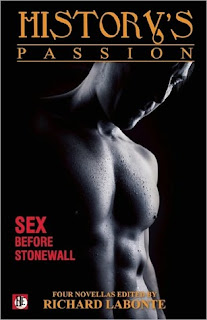 Richard Labonté is one of my favorite editors of gay erotica for good reasons, he has "the touch" when it comes to gathering the best gay erotica writers out there. I consider myself fortunate in that my early introduction to gay erotica was through some of Labonté's excellent anthologies. To date some of my favorite writers in this category are those I found through his collections.

Simon Sheppard's "Heaven and Earth" is a Depression-era tale reminiscent of Bonnie and Clyde or as his main character claims in the story, Leopold and Loeb. The setting is Wichita and the main characters are the bored rich kid Eli and the poor, often filthy, gas attendant Jake. Eli goes on a crime spree and eventually Jake goes along with him. It all turns bloody, lusty, and ends with a gorgeous twist! Sheppard captures those dark times in America quite well in this short novella. There's a desperation and an atmosphere of hopelessness in this story that is carried throughout. His erotic scenes are graphic with an edge of violence. He's in his element in his description of lust with tastes and smells making the scenes come alive.

In conclusion, three of the four novellas in this anthology really worked for me. The fact that all four stories, as chosen by the editor, fit the title and the purpose for this collection is a big plus. If you enjoy gay erotica, there is no question that History's Passion: Stories of Sex Before Stonewall is worth reading. Of course now this book is a finalist for the Lambda Literary Award under the Gay Erotica category, so there you go, another good reason to read it. :)