ARC Review: The Sea Thy Mistress (The Edda of Burdens Series, Book 3) by Elizabeth Bear 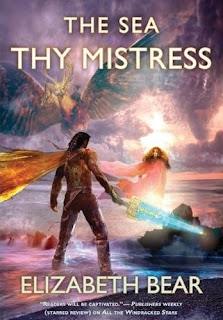 This direct sequel to Elizabeth Bear’s highly acclaimed All the Windwracked Stars picks up the story some fifty years after Muire went into the sea and became the new Bearer of Burdens.

Book Summary:
It is fifty years after Muire sacrificed herself and became the Bearer of Burdens. Cathoair is an einherjar and lives a life of service on the road helping others, as an almost dead world slowly comes to life due to Muire's sacrifice. But Cathoair returns to Eiledon after he's informed that he and Muire had a son. Raising Cathmar gives him a reason to settle into a quiet life by the sea.

A few years later, their idyllic life is disrupted when Cathmar becomes a teenager and dark changes befall them. The goddess Heythe has returned just as promised when she abandoned the world she destroyed and as the Children of Light fought their last doomed battle by the sea. She travelled through time to find proof that her destruction was complete. Instead two thousand years later, Haythe finds a renewed world saved by Muire, the new Bearer of Burdens. Heythe the destroyer won't stop until this new world is erased from existence. Unbeknown to Cathoair and Cathmar, she targets and torments them in the hopes that the Bearer of Burdens will come to their rescue. But Mingan, the Grey Wolf, knows his old nemesis Heythe has returned and this time he'll do whatever is necessary to defeat her.

Impressions of The Edda of Burdens Books 1 & 2:
In All The Windwracked Stars, an unforgettable book that captured my imagination, Elizabeth Bear began this series of apocalyptic and post-apocalyptic endings and new beginnings by focusing on Muire's quest and weaving a story that was both dark and full of hope. There, Muire witnessed an apocalypse and the destruction of her brothers and sisters, the Children of Light. In a renewed world that was again dying, she fought an old evil in the Grey Wolf and a new one in the Technomancer and through battle, sacrifice and forgiveness saved the world from a second apocalypse.

In the second installment, By The Mountain Bound, Bear goes back in time and writes a tragic tale worthy of Norse mythology giving the reader a better understanding of her world and characters. Although the events unfold through all three central characters' points of view -- Muire the Historian, Strifbjorn the Warrior, and Mingan the Wolf -- it is the invaluable in-depth insight into the Grey Wolf's motivations and history that resonates in this story. By the Mountain Bound ends where All The Windwracked Stars begins giving the reader a complete understanding of events past and present and making it a darkly emotional, compelling tale of love and betrayal, particularly as the reader already knows how the story ends.

Review:
With The Sea Thy Mistress, Elizabeth Bear concludes The Edda of Burdens trilogy by going forward in time to about fifty years after Muire's sacrifice and completes this post-apocalyptic trilogy by returning -- to a lesser extent -- to the cyberpunk fantasy style and atmosphere found in the first book. She seamlessly joins the story lines from the two previous books and focuses on Cathoair as the central character.

As with the first two books in the trilogy, there's a dark, doom-like sense and atmosphere that permeates the story. But unlike what happens in By the Mountain Bound, there's hope and light by the end. Having said that, the journey to the light is a tough one. These are tormented characters and in this book Cathoair's past as an abused child and male prostitute come back to haunt him. Bear doesn't stint when it comes to digging deep into this man's damaged soul, his guilt, self-loathing or pain. She thoroughly explores that pain and in turn the sensitive subject of abuse. The characters' internal struggles parallel those of the world that surrounds them. Losing would mean a final end to Valdyrgard.

The story is told in short chapters and shifts from character to character, as seen from their points of view. This gives the beginning of the story a choppy feel and slows the flow and pacing until about page 74 where the points of view are reduced and the plot begins to concentrate on Cathoair and Cathmar. This is also where the pacing and my interest in the story picked up. Even with the choppy beginning, I was surprised when I found myself fully emerged in the story, wanting to know more about Cathoair and getting what I wanted.

In-depth characterization is also found in secondary characters and knowing what ultimately motivates them provides a sense of completion to the book, and in turn the trilogy. Most important of these characters are the Imogen, Selene the moreau with the soul of a Valkyrie, and Aethelred, with Cathmar thoroughly developed as a new, key character. Heythe's need for revenge and destruction are explained, however her real motivations seemed both obscure and rather futile to me. There is no further development for Heythe, making her the weakest character of this story.Bear also gives the reader a full, final view of a redeemed Mingan. He and Cathoair again share deeply emotional moments, bringing the story to a fully closed circle.

Ms. Bear's talents for in-depth characterization, while weaving a fantasy tale with mythology, are impressive. These characters, although obviously patterned after those of tragic Norse mythology, are unique and Bear's own. A tale where everyone seems to win by losing what they love most, by acceptance of self and others and ultimately through forgiveness, The Sea Thy Mistress is a deeply nuanced story and a solid conclusion to this trilogy.